There have been a number of knives targeted at the EDC market that make use of disposable utility knives. Typically, they feature some kind of folding or sliding mechanism that allows the blade to be stowed safely. The new Ronin Energetics Praetor Pocketblade, with its fixed blade design, seems to be an entirely new idea when it comes to these utility blade based EDC knives. 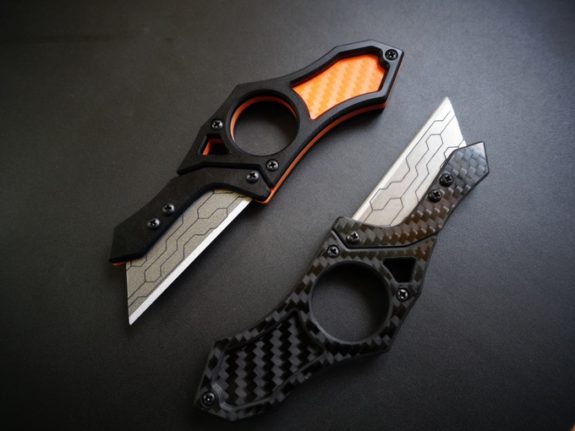 The Praetor Pocketblade is, in its most basic form, a holder for a disposable utility blade. The design appears to harken back to designs like the Perrin La Griffe to offer solid grip and retention. The materials are also very modern with the blade holder being machined from a solid piece of carbon fiber or G-10 composite for both rigidity and light weight.

The Praetor Pocketblade does not fold, so Ronin Energetics has devised two ways of carrying it safely. The first option is a locking belt sheath that matches the modern design of the blade holder. The sheath retains the blade via magnets. They also have a more simple magnetic blade guard that simply covers the edge of the utility blade.