There are a ton of packable backpacks on the market. Some of them really don’t pack as small as you would hope. Some pack small enough to carry on a keychain but are basically just sacks with minimal shoulder straps. The Propper Packable Backpack exists right in the sweet spot of that spectrum and that is a very good place to be. 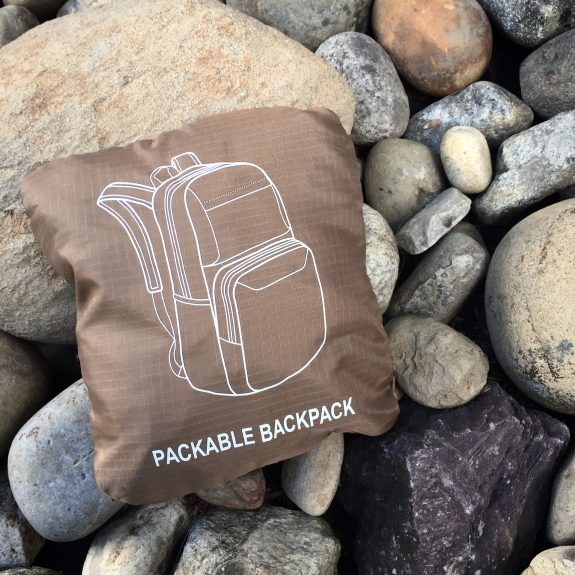 The Propper Packable Backpack is descriptively named. You already know what it is just by reading the name.

This 9 ounce backpack that packs into a compact, integral pouch that measures about 7″ x 8″ x 1″ when packed though it can be compressed further (more on this later). The backpack measures about 18″ x 11″ x 5″ when unpacked or roughly day pack size.

Most of the Packable Backpack is constructed from a lightweight, ripstop nylon material. It also has a DWR coating so this already water-resistant material sheds water even better. The back panel and underside of the wide shoulder straps are lined with a very lightly padded spacer mesh. Most of the edges are bound with edge tape except for where the exterior pockets are joined to the main body of the pack.

The unpacked form of this pack features a large main compartment with internal pouch (which is also the pouch that the backpack packs into). There is a large, zippered pocket on the lower front of the pack and a smaller zippered pocket on the upper front. Both sides feature mesh water bottle pockets. All of the zipper pulls are paracord and the top of the pack has a grab handle. 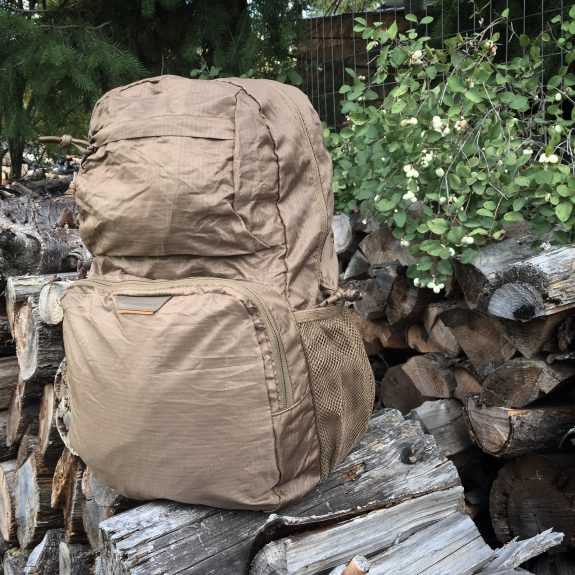 I have always wanted to like packable backpacks but could never warm up to one. They were either too flimsy, too small, didn’t pack small or light enough to be worth carrying, or were basically just uncomfortable sacks with no structure when used as a pack. This is too bad because I like the idea of carrying a small daypack for use once you drop your large hiking pack in camp, for packing on a bike in case you need to get something at the store while you are on your ride, or packing in a suit case for use once you reach your destination.

Packable backpacks offer enticing capabilities but, until I tried this pack, they never really met my expectations. I think that is probably because they start from the wrong place. They are designed to pack small but the designers seem to forget that someone is going to actually use them as a backpack at some point. The Propper Packable Backpack is the first one that I have actually come to like. It isn’t just a good packable backpack, it’s actually a good day pack apart from the packable feature!

The pouch selection on this pack is great. You have 3 different pouches you can use to organize your gear in addition to the main compartment and bottle holders. Most packable backpacks are little more than a sack with shoulder straps so the Propper Packable Backpack really stands out in this regard. 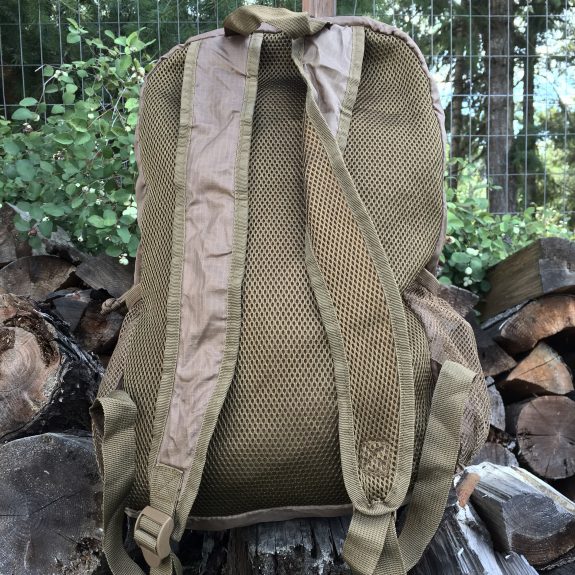 Propper was smart with the materials that they selected. The spacer mesh back panel and shoulder straps breath well, add some padding. weighs little, and adds a small amount of structure to the pack. The DWR coated, ripstop nylon material sheds light rain well and seems to be very durable.

This pack surprised me with how much it will carry. When I used it on vacation, it was loaded with a lightweight rain shell, a thin fleece mid layer, two smaller fleece jackets for my daughters, a ball cap, a pair of compact binoculars, flashlight, multitool, lighter, small first aid kit, some spare ammo, sunglasses, an ever changing array of souvenirs, and the pack was never completely full.

In spite of all the features and capacity, it still packs small enough that you won’t leave it at home. It weighs just 9 ounces and can be compressed beyond the official size of the pouch. I have been able to easily compress it enough to slip into a bottle cage on a bike or pack it down into a round shape smaller than a softball. 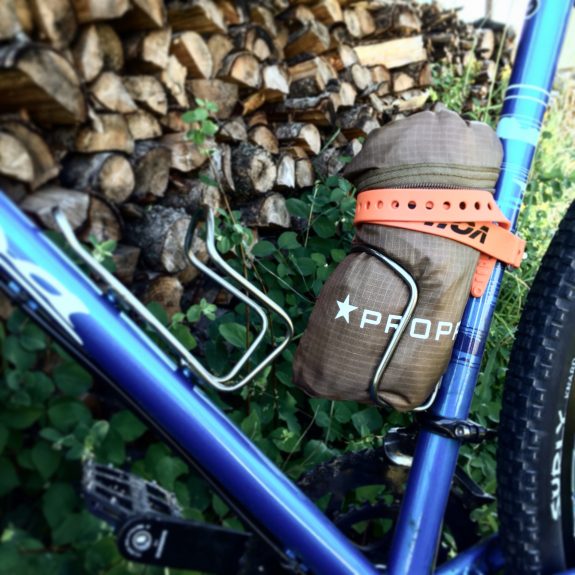 I have put this pack through its paces and it has stood up very well. It has been on hikes, bike rides, and to the range. It has even been through the gauntlet of a family vacation were it saw the tops of mountains, rainy flea-markets, the inside of silver mines, and long days of being dragged all over the countryside. There have been no rips or punctures in spite of carrying heavy and pointy cargo like an ammo can. It has shrugged off light rain easily. It has held up to everything I have asked of it, including a lot that I probably shouldn’t have done with a packable backpack.

There are two big reasons I like this pack. First, it’s actually a good pack that just happens to be packable. I have never been able to say that about any other packable backpack. Second, it still packs small and light enough that you will carry it even though it is far more feature-rich than most packable backpacks. Propper has struck a fine balance here between functionality when unpacked and being compact and lightweight when compressed.

You can check out the Propper Packable Backpack at Propper.com.

Disclosure: The Packable Backpack was provided to me, free of charge, for review by Propper. 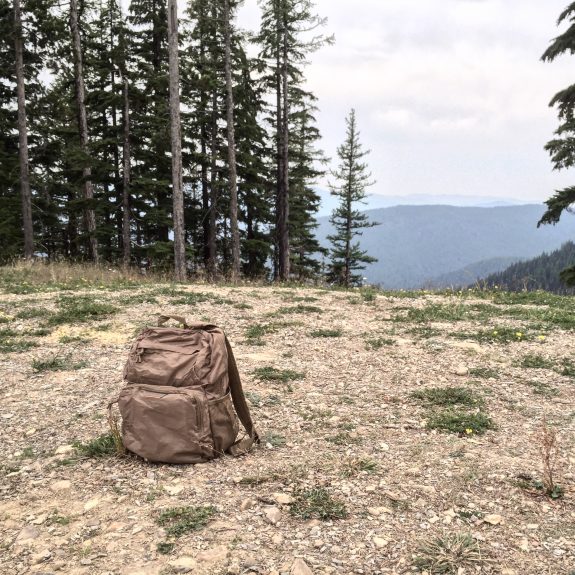 Propper’s new Reversible Pouches are an EDC-Packaphile’s wet dream. These MOLLE compatible pouches are available in 3 sizes and can be turned inside-out to reveal that they can also be mounted on loop material! It’s one pouch with two attachment methods commonly found on EDC and tactical packs. 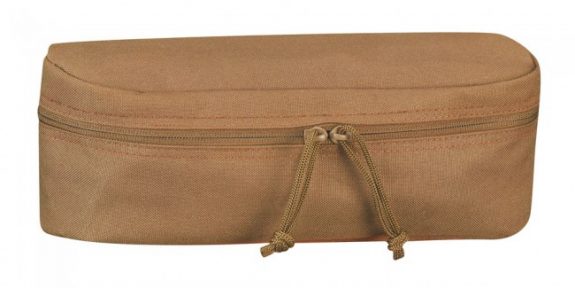 You can check out the Reversible Pouches at Propper.com and see them in action in the video (below) for Propper’s new Marine Corps Assault Pack based U.C. Pack.

There is a lot of excitement around the new clothing lines that Propper is bringing to market in February largely because the lines display some functionality that is pretty unique and sounds very functional. One such unique feature is the gun pocket on the STL I Pant from the LS1 line. The pocket is located at the center back of the pants and it allows for a compact handgun to be stowed.

I don’t have much information on the gun pocket yet but it is an interesting feature. Obviously, it is a less than optimal carry location but the placement allows it to be ambidextrous which is important given that Propper doesn’t know the preferred hand of everyone who wants a pair of pants. It appears that it might be difficult to use if you are wearing a belt but it is hard to say until someone actually has a chance to try the pants.

The gun pocket is what immediately jumps out at me about the STL I Pant but there is a lot going on with these pants. They appear to have a cleaner profile than most “tactical” pants. They do have a multitude of a pockets but they are cut in a lower profile way that doesn’t jump out as much. They are made from Nylon/Spandex fabric incorporating a water resistant DWR finish and they are gusseted to enhance the ease of movement.

Check out the Propper STL I Pant on PredatorBDU.com.

Propper is about to drop a ton of interesting new clothing items on the “tactical” market. The new clothing will be spread over 3 different lines that are focused at different markets (see the Soldier Systems coverage of all three lines). The line that interests me most is the Sweep Collection which features various outerwear and casual clothes many of which integrate magnetic closures to allow quick and quiet access to a concealed handgun.

I find myself especially drawn to the EL JEFFE Puff Vest and Profile Puff Jacket. I have always found “puff” jackets to be extremely versatile. They are great as stand-alone items and layer well for times that addition protection from wind and rain is needed. They also tend to be very easy to pack.

The EL JEFFE and Profile has features that should be useful to their target user group like pull out ID carriers on the front, a large pull out ID panel on the back, and slip resistant panels on the shoulders to keep slings from sliding (how cool is that?). The EL JEFFE Vest has double zippers to allow easy access to your CCW, while the Profile Jacket accomplishes the same thing with magnetic closures.

These items, and all of the new Propper items, are available to be pre-ordered from PredatorBDU.com.

Propper International was one of the three manufacturers selected to manufacture the new Army Combat Pant and the PredatorBDU Blog has the new stock photos of the pants.

Read more at the PredatorBDU Blog. If these pants are made available for commercial purchase, PredatorBDU.com will have you covered.