Mission First Tactical’s new EPG16V2 Grip is their first AR-15 grip to feature a more vertical, 15 degree grip angle. It has MFT’s typical light stipple-like texture and fills in the gap under the trigger guard.

Check out the EPG16V2 Grip at Mission First Tactical. 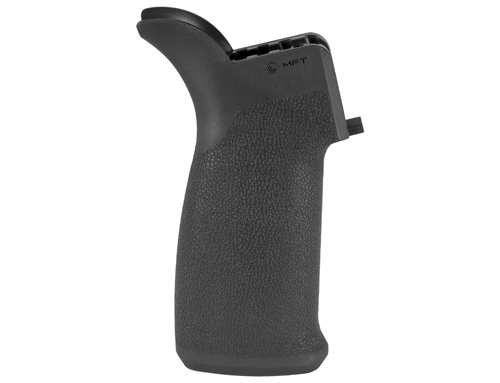 The BMS weighs just 5.8 ounces. Most of the lighter weight aftermarket stocks already on the market weigh more than 8 ounces and many of them weigh much more. So, if weight was the only factor, the BMS would be an easy way to reduce the overall weight of your carbine by at least 2 ounces. 2 ounces by themselves may not seem like much but if it is part of an overall weight reduction effort that includes choosing light weight optics, barrel profiles, hand guards, weapon lights, and iron sights, and more, 2 ounces can be a significant reduction. It isn’t difficult to get a carbine’s total weight down well below 8 pounds loaded with just a little forethought and without having to sacrifice function or reliability. 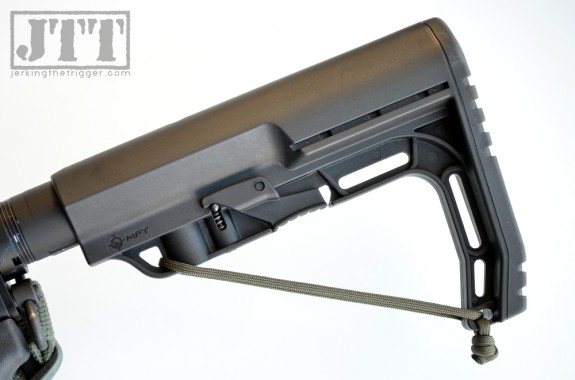 Comments from the Peanut Gallery

Certainly no one is complaining about this stock’s weight. There have however been concerns about its shape. MFT radically reduced the weight of the BMS by removing the typical diagonal support structure that would be in place to support the butt plate. The result is an “L” shape that is perceived as structurally weak and a potential snag hazard. Both of those concerns have merit and will be addressed directly.

The BMS is structurally weaker than it would be if it a diagonal brace that ran from the front of the stock to the base of the buttplate. However, it was designed to be light weight. It was not designed to be the most durable stock on the market. If you need the most durable stock – look elsewhere. I found it to be durable enough to withstand repeated mortaring which is the most rigorous task my stocks are ever likely to be put through. I suspect, like most collapsible stocks, it is more likely to fail at the stop pin than to actually break under normal use. It is not as durable as it could be but it is durable enough and that is the entire point.

I give the concerns about the stock becoming a snag hazard more credence though they do seem to be slightly overblown for many users. I have used other MFT stocks with hooked buttplates before and never had an issue with snagging but it should be noted that I am not moving in and out of vehicles or crawling through vegetation as part of the normal way I use this carbine. If your intended use of the carbine involves activities that entail a high probability of snagging you have two options: choose a different stock or tie a bit of cord onto the stock that stretches from the front to the buttplate. That was easy.

Even without the paracord that I tied onto my BMS, I had to induce snagging. It never just happened. The potential is certainly there but even when used with the buttplate tucked in very tight alongside my plate carrier or around chest rig straps, I have yet to have a snag that I did not purposely induce. I can’t even purposely induce a snag with about half an ounce worth of paracord tied to it. 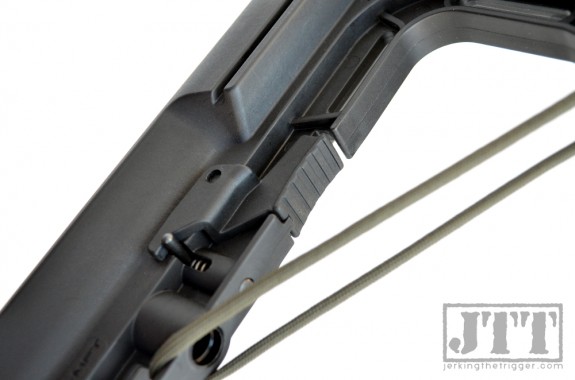 MFT absolutely nailed the adjustment lever design. It sits basically flush with the body of the stock to prevent it from accidentally being pressed. It is very unobtrusive which is exactly what I want from a lever that I basically never use. 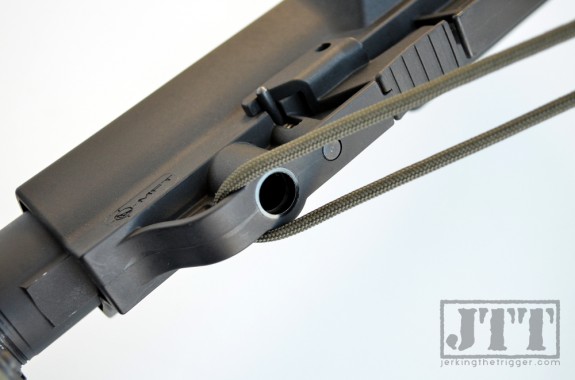 The very different shape of the stock allowed MFT to place a QD sling swivel socket in a very different place than where you will find them on most stocks. It is located on the front of the stock on the bottom. This central location is ambidextrous and closer to the receiver to allow greater range of motion. The socket is not rotation limited which is disappointing.

The cheek weld is very good for such a compact stock. The BMS has a flared shape that feels sort of like a stock with SOPMOD style battery tubes under your cheek.

I found that the stock has tight, rattle-free fit on every receiver extension that I tried. It is tight enough to prevent rattling and loose enough to adjust without much fuss though it does drag more than some looser fitting stocks. I don’t move my stocks around much so I appreciate the tight fit even it comes at the expense of just a bit of ease of adjustment. 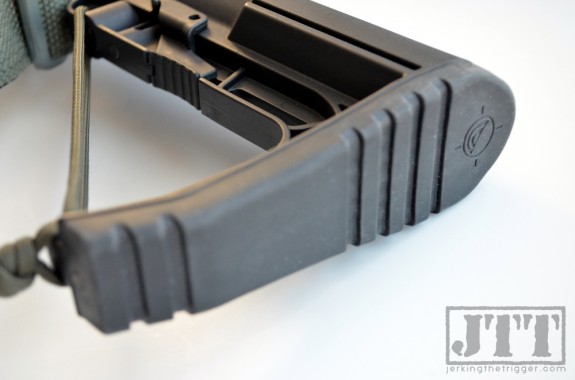 Check out the BATTLELINK Minimalist Stock at Mission First Tactical. 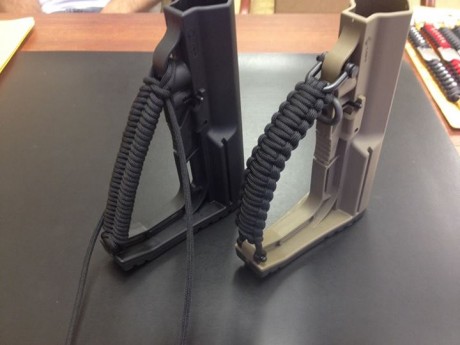 Some people have expressed concern that the hooked shape of the newly released BATTLELINK Minimalist Stock from Mission First Tactical (MFT) could pose a snag hazard. Some enterprising users have found a way to prevent any potential snags and keep some emergency paracord on hand. MFT will be offering these paracord straps as an accessory or you can make your own.

Check out the BATTLELINK Minimalist Stock at Mission First Tactical. I have one of these stocks inbound for review so stay tuned.

It has been a while since we first told you about the Mission First Tactical BATTLELINK Minimalist stocks. This very lightweight (5.8 ounces!) stock has been in development for quite some time now and is finally shipping. Check it out at MissionFirstTactical.com. 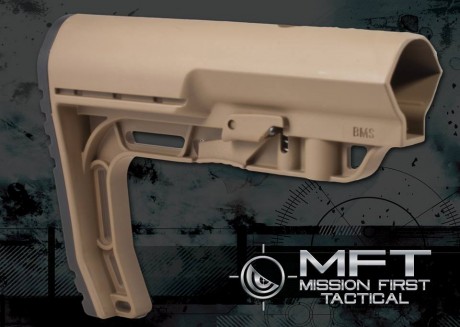 Mission First Tactical released new images of the Battlelink Minimalist Stock recently. The new images give a great look at the features of this 4.5 ounce carbine stock.

The Battlelink Minimalist stock has one of the best placed QD sling swivels that I have seen. It is placed near the front of the stock on the underside. This is a great place to mount your rear sling mounting point in order to allow excellent range of motion. MFT states that this mounting location also helps prevent snagging on the “hooked” buttplate of the stock. Additionally, these new images show the shielded adjustment lever.

Many people have commented on the perceived snagging potential of this stock. It certainly looks like it could be an issue but MFT claims that this stock has already been field tested by several HSLD types and it is a non-issue. I am hoping to pick one of these up to try for myself.

The Battlelink Minimalist Stock should be available soon. It is currently available for pre-order.