I know many of you applied common sense and were already using your Grip Stops on AR-15 Pistols. However, some people just have to have to permission so Lanco Tactical obliged. They have received official correspondence from the ATF confirming that the Grip Stop is similar enough in function to other angled for grips to be used without complication on an AR-15 pistol (see the letter below).

I should note that the Grip Stop offers a lot more functionality than your typical angled grip. Check out our review and then head over the Lanco Tactical to learn more. 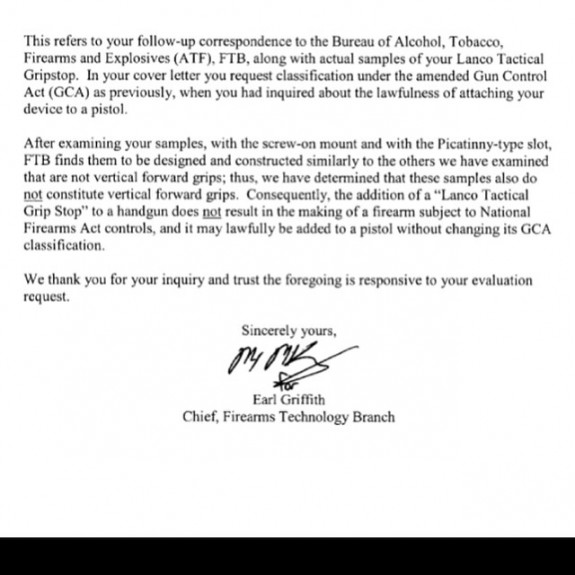 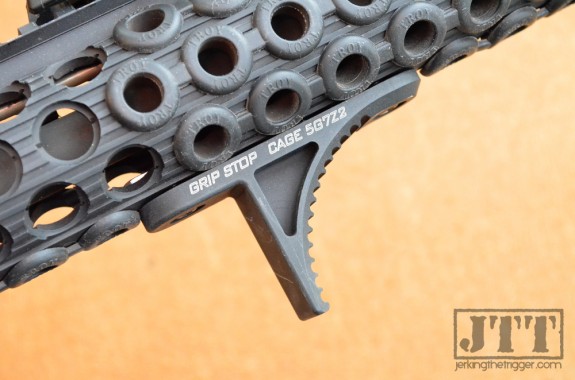 GripStop is a hard anodized aluminum forward grip that can be used on a number of different long guns. According to Lanco Tactical it was “designed by a former USMC combat veteran to fill the void between using a vertical grip and hand stop.” Basically, GripStop’s unique shape allows the user to vary the way they grip it and makes it ideal for use as a barricade stop or support for awkward shooting positions.

It is available in 2 different versions that cover most hand guard types. The original GripStop mounts via two bolts on 2 3/8” hole spacing and can be adapted to a number of different hand guards including most of the various “universal” free float tubes, KeyMod, and anything you are willing to drill the necessary holes in. It weighs 2 ounces

GripStop Mod 2 is a rail mounted version that can be mounted to any standard 1913 Picatinny rail. It weighs 3.1 ounces. 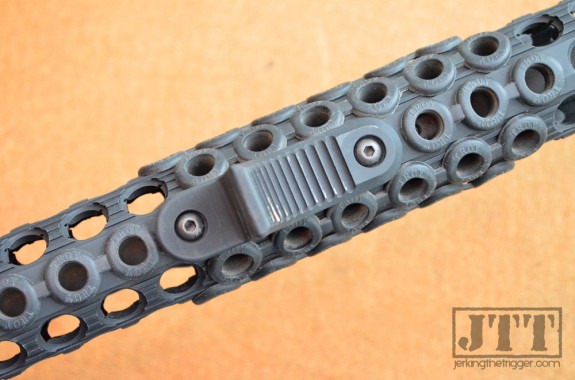 I have been using an original GripStop (from before the KeyMod compatibility was added) since around the time it was introduced. I like it so much that I also purchased GripStop Mod 2. Both have served me very well. While their attachment method differs, they are nearly the same functionally so this review can cover both.

The key to GripStop’s success is its unique shape. It should be obvious from the pictures but if you picture half of a skateboard half pipe turned upside done, you will have the basic shape. The leading edge of the curve is parallel with the bore and close to the hand guard while the trailing edge is perpendicular to the bore. This shape allows the user to adjust how the grip feels by sliding their hand forward and back.

If you prefer a “C Clamp”/thumb over grip like you might typically use with a handstop, you position your hand further forward on the GripStop, bringing your hand more in line with the hand guard.

You may just find yourself somewhere in between and that is part of the strength of the GripStop. It supports just about any grip. 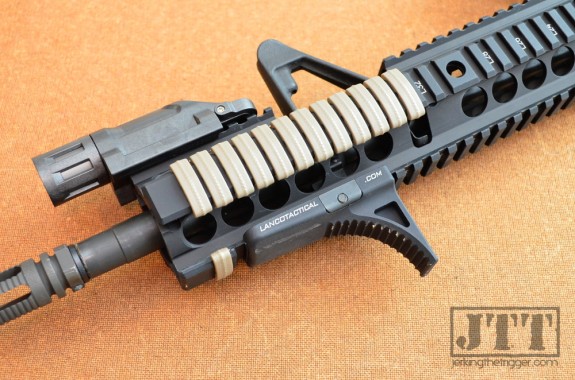 Both versions of the GripStop have large ribs machined into the curved portion. These serve to enhance grip. They are large enough that they don’t feel sharp on your hand and the gaps between the ribs bite into barricades very well. You can plant the GripStop on a barricade and really lean your weight in behind it to control recoil.

The rear face of the GripStop is completely vertical (perpendicular to the bore). This allows you to hook it against a barricade and pull back with the strong to control recoil or to hook it on your forearm in awkward shooting positions like “brokeback prone.” The ability to hook the forearm or push against the forearm brings a lot recoil control and stability to these awkward field positions.

GripStop’s weight is a potential fly in the ointment for some users. At over 3 ounces, the GripStop Mod 2 weighs 3 times as much as a typical handstop. The direct connect GripStop weighs only 2 ounces but that is still more than a smaller handstop. I suppose there are a few ways to look at that. I have chosen to purchase one in spite of the weight because I appreciate the added functionality that comes with it. I think the functionality justifies the weight. You could also say that if you are using a quad rail instead of a more trim universal hand guard, you probably aren’t overly concerned with weight. Still, it would be nice to see some additional weight reduction efforts if possible. 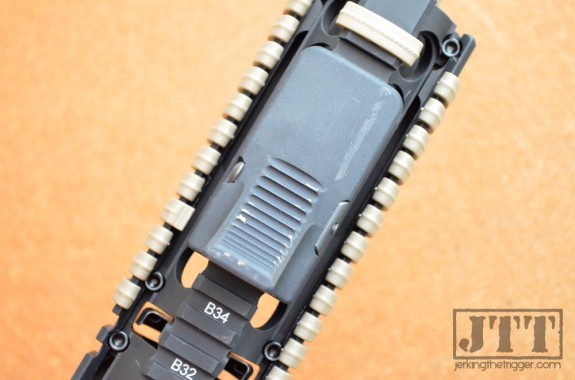 GripStop bridges the gap between vertical grips and hand stops. It does a good job of offering the best of both along and a range of functionality that lies somewhere between the two. It is basically the chameleon of forward grips and should be able to fit anyone’s shooting style while also giving them some options that they may not have had before.

Check out the Lanco Tactical GripStop.

It appears that Lanco Tactical is working to bring a new M-LOK compatible version of their excellent Grip Stop to market. The Grip Stop is currently available in direct connect version for modular rails and KeyMod and a rail mounted version. The addition of an M-LOK version would give the Grip Stop even broader compatibility.

Check out the Grip Stop at Lanco Tactical. 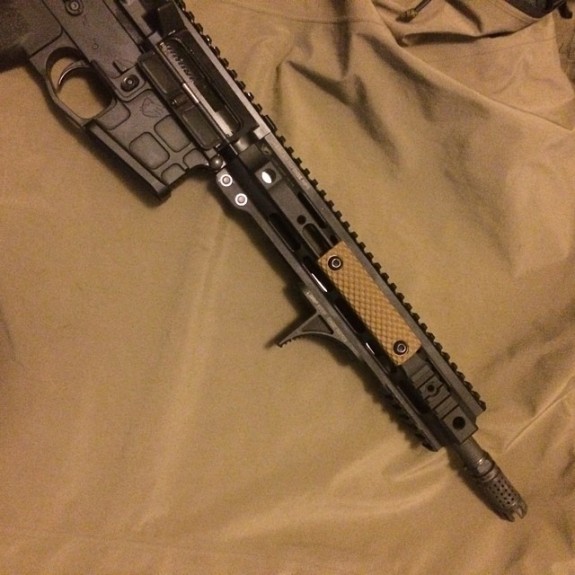 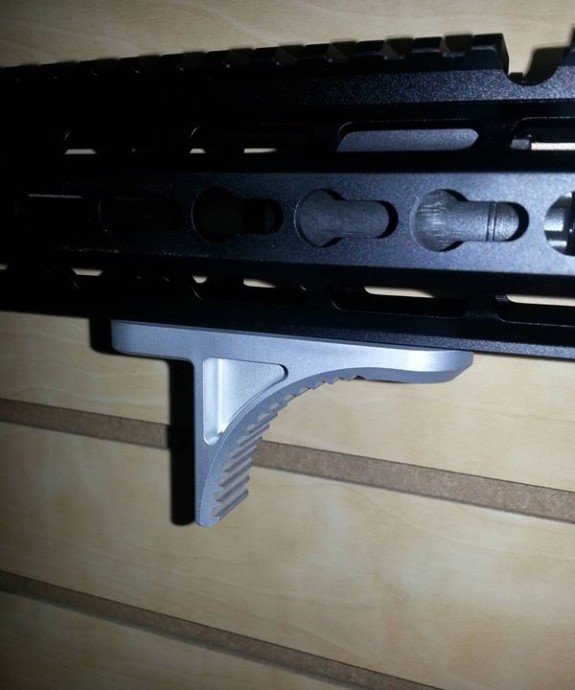 The next production run of the Grip Stop from Lanco Tactical will feature an improvement that is sure to please KeyMod fans. It will retain all the direct connect functionality (via bolts and a backer plate) of the original Grip Stop but it will now also come with hardware that makes it KeyMod compatible. The new version should be ready to start shipping sometime later this week.

The rail mounted Lanco Tactical Grip Stop Mod 2 is now available. This brings the versatile Grip Stop functionality to an even wider variety of hand guards.

I purchased one of the original Grip Stops several weeks ago and I have been extremely impressed with it. It lets the user determine the angle of their wrist by sliding their hand on the grip by moving their support hand forward or back. It is extremely comfortable to use off hand and locks onto barriers easily and securely. 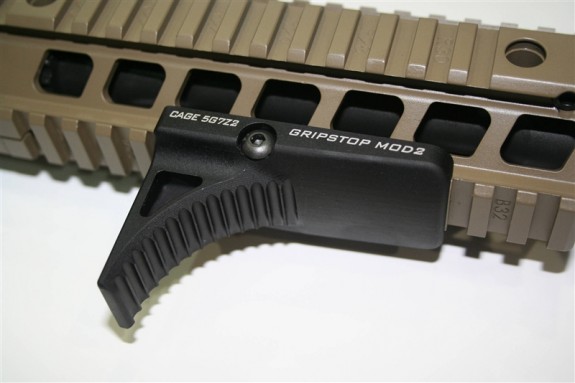 If the Mod 2 version brings the same level of functionality to railed hand guards, it will be a tremendous success.

Check out the Grip Stop Mod 2 at Lanco Tactical.