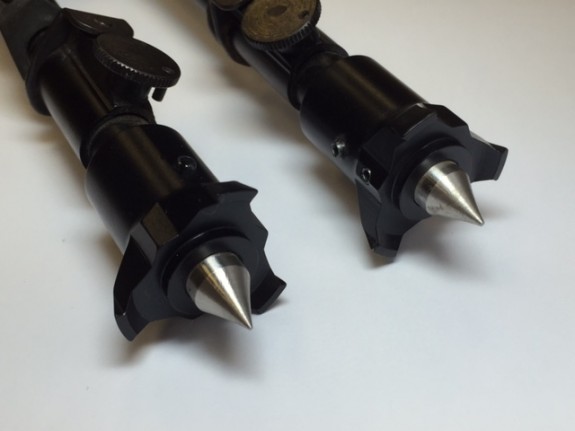 Tactical Works is now carrying Hawk Hill Custom’s spiked Harris bipod replacement feet. We have profiled these before on JTT. They are notable because of their quality and the installation tools that ship with them (see the video below). If you have ever swapped the feet on a Harris bipod, you know how difficult it can be. The tools included with these bipod feet go along way toward taking the pain out of the process.

Bipods can be a great tool for shooting in the field but if you keep those domed rubber feet, you will never get the most out of them. In order to actually “load” a bipod, you are going to need something that bites into whatever surface you are resting it on when you shoot. That is where the Ultimate Bipod Hawk Talons from Hawk Hill Custom come in.

The Ultimate Bipod Hawk Talons look to be an excellent value, especially if you have a Harris Bipod. First, the central spike on these feet is stainless steel which is a step up from the aluminum found on most spiked feet in the same price range. My current bipod spikes are aluminum and, while they have held up well for a long time, they are definitely not as sharp as they were. Steel construction would go a long way toward helping them stay sharp.

Second, they come with a nifty set of two tooling blocks and a draft pin. The tooling blocks are specifically made to support the bipod and help you drive out the roll pins that secure a Harris Bipod’s rubber feet. The video below shows the process and it looks pretty painless. I can assure you, as someone who has replaced the feet on a Harris Bipod, that without the provided tools it is an absolute pain in the backside.