Dimpling an AR-15 barrel serves a couple of important purposes. It indexes the gas block to ensure that the gas block aligns with the barrel’s gas port. It also serves as a detent that prevents the gas block from spinning if it is impacted. In spite of this, most AR-15 manufacturers that offer low profile gas blocks, still do not dimple their barrels. Now, it’s easier than ever to do it yourself.

I recently received a GBDT or Gas Block Dimple Tool from EZ Accuracy in a TacPack. Since that time, I’ve used it to dimple 5 gas blocks and I’ve purchased two more of them to give as gifts. I am thrilled with the GBDT and think it makes a great addition to any AR-15 owner’s work bench. 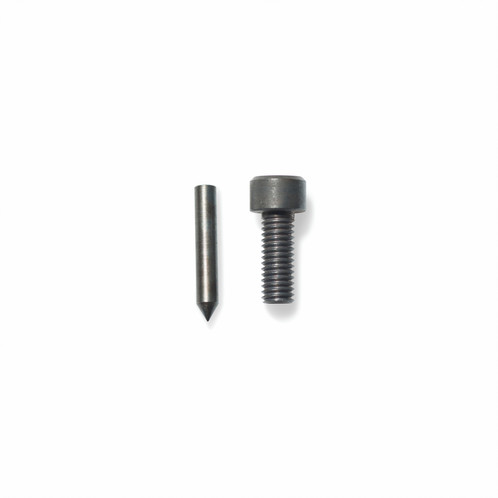 The GBDT is simple – I mean really, really simple – and that is what is best about it. It comes with two parts: a 10-32 hollow screw and a tiny center punch. You can pretty much figure out how to use it by looking at it but is also comes with simple instructions.

To dimple your barrel, you simple remove one the set screws from your gas block. There are usually at least two set screws in a low profile gas block. You should leave the others in place so that the gas block can not move. Replace the removed set screw with the included hollow screw and hand tighten. Place the included center punch in the hollow screw with the pointed end toward the barrel. Give it a tap with a hammer to center punch the barrel (prevents the drill bit from walking in the next steps). Remove the center punch and replace with a sharp 1/8″ drill bit. Drill only slightly into the barrel. You’re done. It takes less than 5 minutes.

The dimple doesn’t need to be deep to work so be conservative with your depth. Drill bits are cheap – use a fresh one. One dimple per gas block is typically enough. I prefer to dimple under the set screw closest to the receiver as this one is typically in the same location on many gas blocks.

Check it out: EZ Accuracy GBDT