Lasers on handguns aren’t really en vogue any more but they are still useful. Visible lasers are a great addition to smaller defensive firearms, especially those with marginal sights that aren’t easily corrected like small frame revolvers. A good laser can make firearms like these easier to aim and extend their useful range but that doesn’t mean you can forget the sights, no matter how rudimentary they are, altogether.

At first blush, it would be easy to find yourself under the impression that once you have installed a laser, you’ve basically created a gun that all but aims itself in any lighting condition and from any shooting position. It would also be easy to reinforce this notion with dry fire and even live fire practice at the range. That simply isn’t the case. 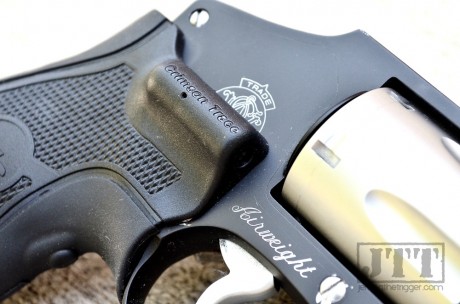 I am not trying to say lasers are difficult to use or aim. Lasers are easy to aim in many situations… and that is the problem. Even when you present the gun in such a way that the it is not already oriented perfectly to the target, it is generally easy enough to move the aiming point based on the visual feedback of the projected dot on a surface behind or around the target. This is exactly the situation that most people are presented with when they train with a laser and it becomes their reality or expectation of reality. There is almost always something directly behind or around their target be it an interior wall during dry fire practice or a backstop on the range.

Many shooters, even those who train regularly, have never thought of what happens when the surface behind the target is removed because it is not something they have encountered. With no backstop, a laser equipped firearm can be aimed in such a way that the dot is not visible because it is projecting out into the space around the target and not on a surface that registers the dot.  Think of a target on a stand in the middle of a pasture or large parking lot. The dot would not be visible unless it was projected on the target itself or the ground near the target. When this happens there is no visual feedback for adjusting the point of aim which can leave the unprepared shooter with fewer options.

This is why a correct presentation/draw stroke, even on a laser equipped firearm, involves acquiring the sights (or at least some form of coarse sight picture). The shooter finds the sights and only then, if the projected laser dot is visible, they may switch their focus to the target and dot. This technique mitigates failures on the part of the shooter to find the dot and failures of the laser itself. If there is no visible dot, the shooter is already on the sights.

The next time you practicing with a laser equipped handgun, remember – sights first, then laser. 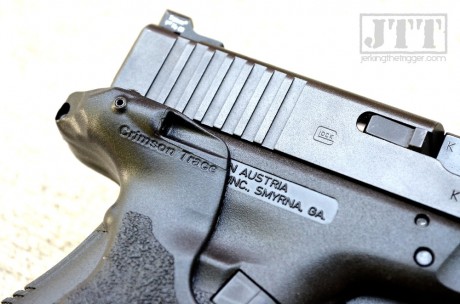 One Response to When Using Lasers on Handguns, Don’t Neglect the Sights