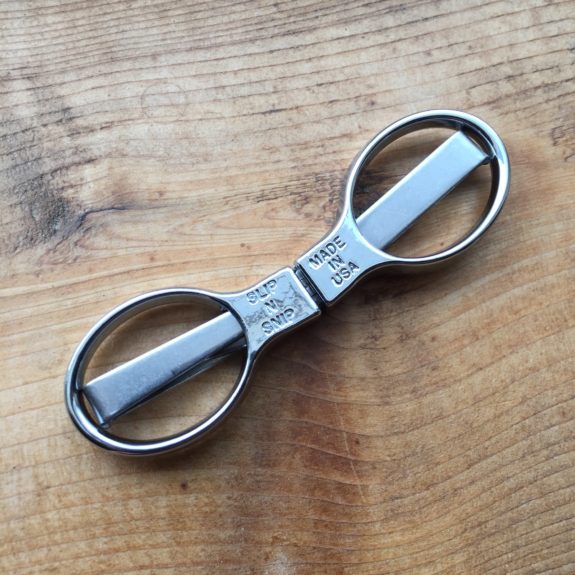 Most people’s experience with folding scissors is with cheaply made imports with plastic handles that break, thin stamped blades that flex and don’t mate correctly, weak pivots, and cutting performance that might eventually mash through whatever you are trying to cut. None of those things are true of SLIP-N-SNIP Folding Scissors which are still made in the USA and I have been using for years.

SLIP-N-SNIP Folding Scissors have cast zinc handles – not plastic. The handles are small enough to be very compact, large enough for my fingers with room to spare, and very nicely rounded for comfort. The metal handles make them heavier than plastic handled folding scissors but the step up in quality is well worth it.

The blades are stamped steel which is thicker than the steep found on cheap folding scissors. They are very nicely ground and mate perfectly on the pair I have owned. They are very sharp and cut cleanly without mashing – even on items like para-cord inner strands or fine threads.

The SLIP-N-SNIP Folding Scissors are only about 3″ long when folded and weigh less than an ounce. They unfold into scissors that are almost 4″ long with a cutting surface of about 1.25″. This makes them a great size for with first aid kits, EDC, or on the trail. Scissors are just better than a knife for some cutting tasks and I am often glad I have these with me. I’ve used mine to cut masking tape when pasting targets, gauze and tape for dressing wounds, moleskin for covering blisters, and the list goes on.

SLIP-N-SNIP Folding Scissors usually cost less than $8. They cost more than cheap folding scissors but I still find them to be very reasonable consider the quality and the fact that they are made in the USA. They even offer a version with a non-reflective, rust resistant black coating (which I wish I knew about when I bought my SLIP-N-SNIP scissors)! 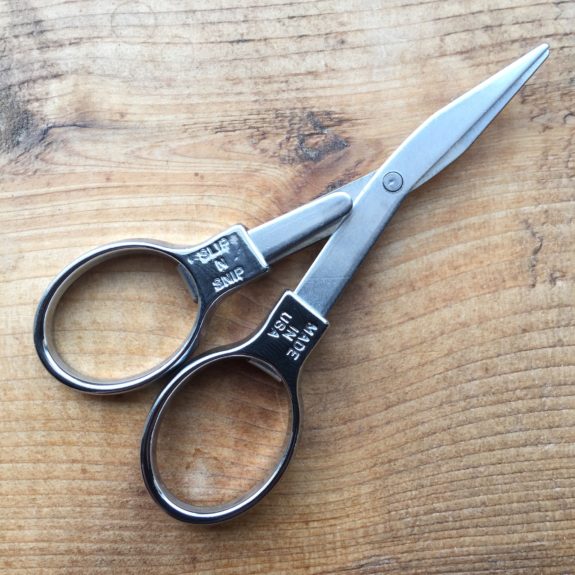 Where and How to Buy:

You can find SLIP-N-SNIP Folding Scissors at some sewing shops where they are well known for their quality. However, sewing shops often carry a finer tipped version (SLS3) that may or may not be desirable for EDC. I have only used the SLS1 version which is a more general purpose scissor. If your local sewing shop doesn’t have them, several online retailers do.

The following links are affiliate links:

Do you have scissors that you prefer or another tool recommendation that fits The EDC Tool Roll? Tell us about it in the comments below or drop us a line on the Contact page.

One Response to The EDC Tool Roll: SLIP-N-SNIP Folding Scissors