Welcome to Bargain or Just Cheap? This series reviews budget friendly knives for a variety of uses in a short format. All of the knives will cost less than $50 (in most cases, much less) and will be purchased out of my own pocket. I’ll buy them, carry them, and use them in an attempt to determine if the knife is a bargain or just cheap.

It isn’t hard to find an axe at the hardware store but finding one worth owning is another story. There are lots of tools that look like axes but much of the nuance of what makes an axe good has been lost. You can still get great axes but they tend to cost a fortune. Is the Cold Steel Trail Boss an a bargain pack axe for the budget woodsman or is it just cheap? 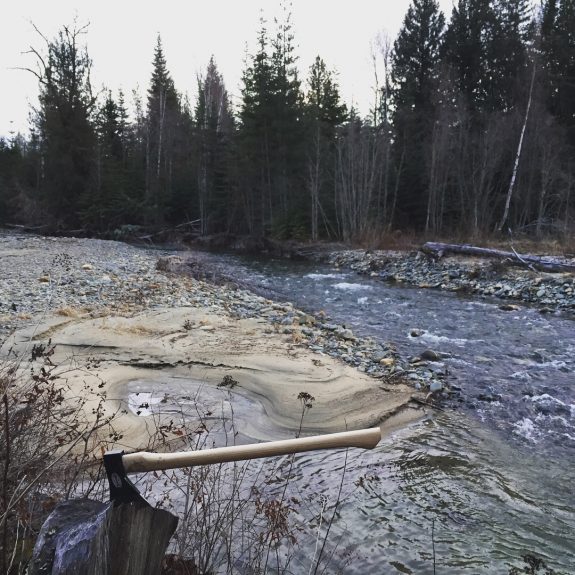 The Trail Boss is probably a bit of an odd duck to the axe purist. I have seen its head referred to as a Hudson Bay pattern but it really has more in common with German designs thanks to its larger, fan shaped bit. Its 23″ handle has some shaping but it is mostly straight overall, likely to save cost. It really is a mish-mash of design elements but… it works really, really well.

It is always best to be able to inspect an axe in person when purchasing but I bought this one on Amazon per the rules for this series of reviews. The hang is quite good – straight, tight, with wood pushed out, filling the eye. The handle is quite good too with good grain orientation, no heart wood, run out, etc. I have been able to handle several of these and they have all been quite good. 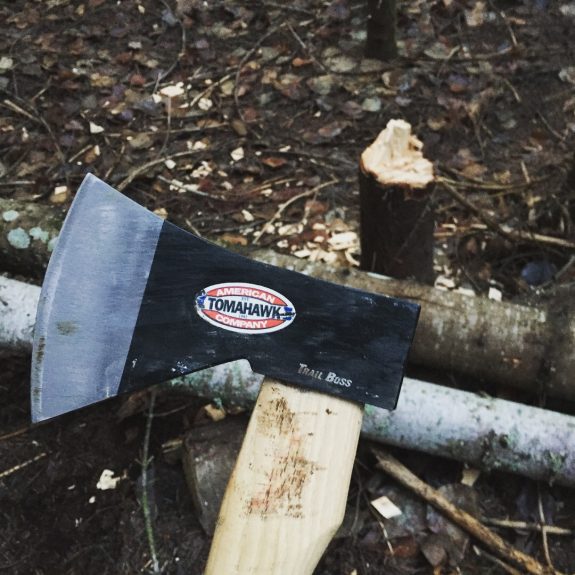 The Trail Boss carries very light for an axe this size. It is large enough and heavy enough for light felling (especially when used with a compact saw of some kind) and compact enough to lash easily to most overnight or larger bags. This would be an extremely handy tool for packing into a winter camp.

The bit has nice thin cheeks which is surprising on an inexpensive axe. The head comes with only a courtesy edge that you will need to finish when the axe arrives but once you do, you will be treated to an axe that bites deep thanks to the efficient shape of its cutting bit. It also splits surprisingly well for a compact axe and splitting is likely the most important thing you will ask of a camp axe. This attention to head geometry is what makes an axe work and what is largely missing from most hardware store axes.

I am not exactly breaking the news that this is a great budget axe so there is already a solid after-market for this axe. That means that if you want an axe mask (bit cover) or sheath, you can easily find them and they aren’t expensive either.

There are still a few things I would change and most of them have to do with the haft. The are of the haft above the flared butt is where users are likely to grip the Trail Boss most often. This area has been left slightly square which can easily be fixed with a rasp or belt sander. It’s odd but also not that uncomfortable. The haft also comes with a lacquer finish. Boiled linseed oil would be preferable as lacquer finishes cause blisters on bare hands but this too is easily fixed… I still haven’t “fixed” mine because it works and I wear gloves. 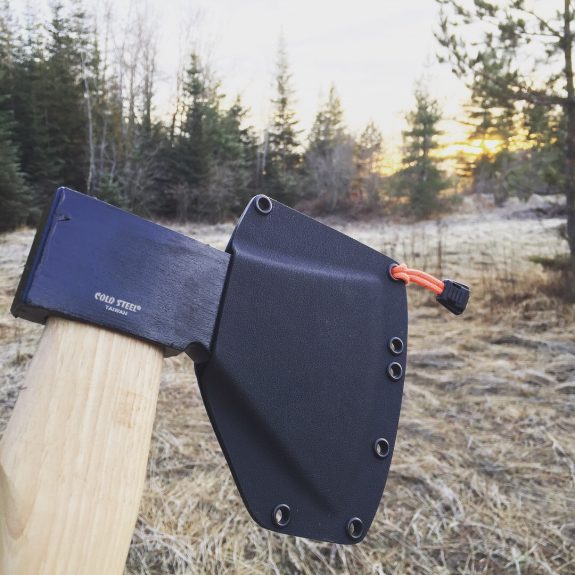 The Cold Steel Trail Boss is certainly a BARGAIN. It shows, in its design, an understanding of what makes an axe functional. It won’t have the camp cache of a swedish axe but it also won’t set you back nearly as much and will perform nearly as well. It is functional as delivered and the knowledgeable axeman can really transform it into something special.

I am probably going to buy another one.

I use Amazon as the price base line for this series. All knives (and axes) were purchased by me, from Amazon:

The above article contains affiliate links.