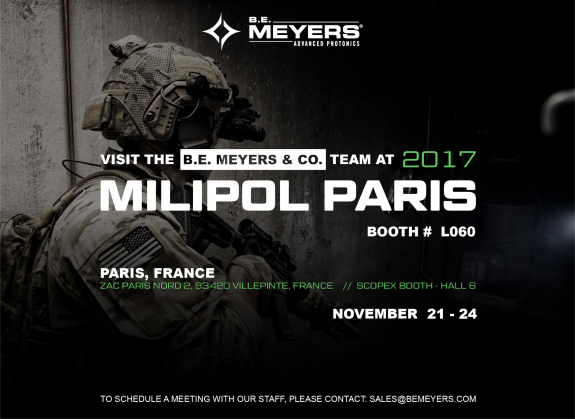 B.E. Meyers’ Modular Advanced Weapon Laser (MAWL), a high power infrared and visible green aiming and illumination laser for individual carbines, offers improved ergonomics, interface, and performance. The MAWL-DA has been designed from the ground up around the evolved needs of the modern night fighter and is currently in use and deployed on operations with both Tier 1 Special Forces, and internal security agencies in the U.S., Europe, and other nations.

Also displayed at the SCOPEX exhibit will be the IZLID series of lasers for Pointing and Illumination, including the IZLID Ultra. The IZLID Ultra is currently the standard for JTAC use. Featuring a beam bright enough to communicate with high-altitude aircraft, it excels even under conditions containing high ambient light.

B.E. Meyers & Co. Director of Business Development, Jamie Wilford, will be at the SCOPEX booth November 22-23 to provide detailed information about the company’s products.

To connect with Mr. Wilford, or to schedule a meeting, please contact sales@bemeyers.com.

Milipol Paris, the leading event for homeland security, is organized under the patronage of the French Ministry of Interior. It is an official event carried out in partnership with the French National Police and Gendarmerie, Civil Defence Service, French Customs, City Police, Interpol, etc.