It’s Little Bird season! If you follow the work of RMJ Tactical, you know what I am talking about. 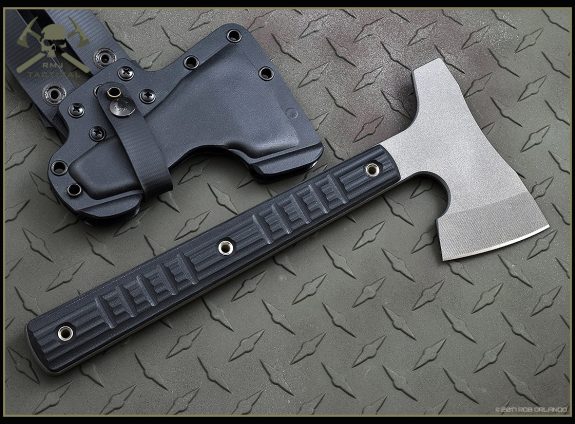 RMJ Tactical’s Little Bird Tomahawk is their way of saying thank you to their customers. It is basically a one-off design that they sell at dealer cost. They are made in limited numbers and often sell out quickly. They have released a Little Bird in 3 of the last 4 years (2014, 2015, and now 2017).

The Little Bird 2017 was just released today and it is limited to about 90 pieces. It sells at $320 including free shipping. This is a considerable discount versus something like an RMJ Jenny Wren which is very similar is size and construction to this latest Little Bird.

This tomahawk is basically an ourdoorsy version of the Jenny Wren. It is nearly identical in size to the venerable Jenny Wren, features a hammer pole, and a false edge on top specifically designed for scraping. It is laser cut and machined from 1/4″ thick 80CRV2 steel and has machined G-10 scales. Like all RMJ Tactical tomahawks, it comes with one of their excellent sheaths with MOC Straps (Low).

These were released at Noon, Eastern time so the clock is ticking. Act fast if you want one.