The two most popular tools that we have featured in The EDC Tool Roll so far are the Knipex Cobra Pliers and the VIM Tools HBR5 Ratchet/Driver. I know several of you have emailed me to say you picked up the HBR5 and love it (thanks for those emails by the way). I have also had a couple of emails regarding commonly seen alternatives to the HBR5 like the GearWrench MicroDriver Set that appears so similar… So, I bought one. 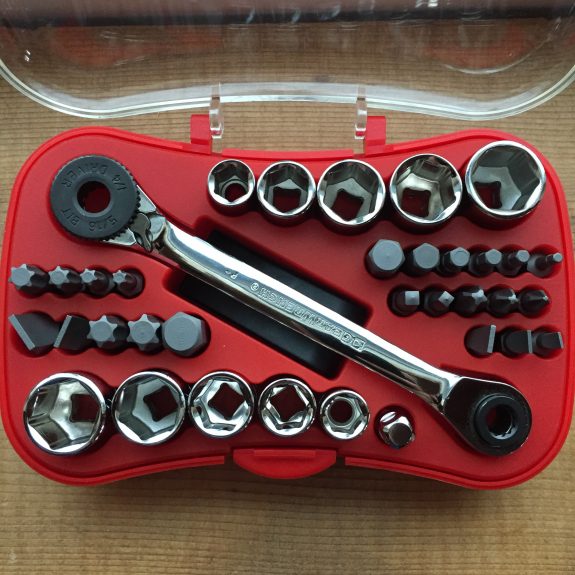 The ratchet that is included in the GearWrench set is remarkably similar to the HBR5 but it is slightly larger in every dimension – longer, wider, and thicker. This may be good or bad depending on your application. It is reversible via a small lever at both ends and both ends have a thumb disc just like the HBR5. One end accepts standard 1/4″ screwdriver bits. The other end accepts 5/16″ bits and you are most likely to use it with the included socket adapter since 5/16″ bits aren’t common.

The biggest difference between the GearWrench set and the HBR5 is what is included. The HBR5 is inexpensive but only comes with the ratchet and bit adapter. You have to provide all your own sockets and bits (which most of us already have around). The GearWrench set comes with a case and a selection of bits and sockets. The case is too large to EDC in a pocket but it is great for a range bag or EDC bag. If you want to add this to a small tool roll for pocket carry, you can just raid the kit for the sockets and bits that you need and carry those rather than the whole case.

Now that I have used both side by side, I can’t say that I have a strong preference for one tool over the other though the slightly smaller size of the HBR5 makes it handy in some situations. If you need a full kit, the GearWrench MicroDriver Set is probably the better choice for you. I have come to really like either of them for use in a range bag for common range tasks like assembling barricades for drills, assembling target stands, and even optic installation.

Alternatives: My favorite tool of this type is the VIM Tools HBR5.

Chapman makes a number of excellent ratchet kits with similar functionality but they use proprietary bits. Stanley also makes a kit under both the Stanley and Bostitch brands that you can find at some Wal-Marts. Finally, a reader named Brian recommended the Tekton 1485 bit ratchet which could work if you like a padded handle. Thanks Brian!

Thanks again to everyone for all the emails and comments. You’ve really had some great tips.

Do you have compact bit ratchet that you prefer or another EDC worthy tool you would like to recommend? Tell us about it below.

One Response to The EDC Tool Roll: GearWrench MicroDriver Set