Tyrant Designs has been teasing for months about their newest product but the time has come. The HALO Series MiniVert ForeGrip is now available to order. 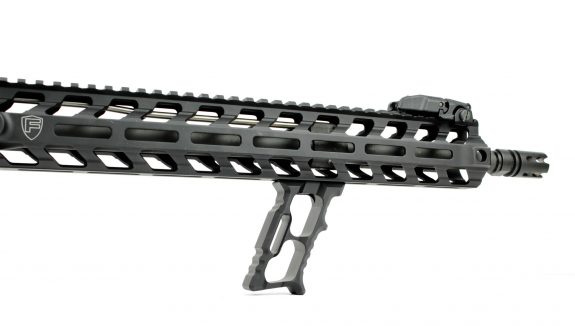 The MiniVert ForeGrip has Tyrant Designs’ signature style which is to say it looks like it was designed by a sentient computer and machined by CNC robots to be used on plasma guns wielded by a futuristic race of cyborgs. In short, it looks great… but looks aren’t everything. Care has been taken with its slight angle and well placed texturing to ensure that it performs well too.

Here is what Tyrant Designs had to say in their press release:

Tyrant Designs CNC, an industry leader in high-end aftermarket AR grips has just announced their release of the new HALO Series MiniVert, a vertical forward grip. With dimensions slightly smaller than the average AR-15 vert grip, the MiniVert sports an aggressive looking knurl and well thought out ergonomics. Coupled with the ability to fit directly to MLOK and Keymod rail systems this little grip packs a big punch. With an overall length just shy of 3 inches, Tyrant instead utilized an elongated lip at the bottom allowing the operator the option of either tucking their pinky behind or resting the finger the traditional way.

“With all of the positive feedback we have received from reviewers, dealers and social media, we are extremely excited to announce the official release of our HALO Series MiniVert! This concept took months of designing and field testing to make it as comfortable as possible while maintaining our well known aggressive styling. It truly is a vertical grip that can be used in all situations on various platforms to heighten the performance of the operator. We are pleased with how it came out and look forward to seeing it on AR’s everywhere. ”

You can check out the HALO Series MiniVert ForeGrip at a reduced, introductory price at TyrantCNC.com.