Forward Controls Design will be releasing their EMR-A (Enhanced Magazine Release – Ambidextrous) soon and functional prototypes are already out in the wild making an appearance at Cola Warrior West III.

The EMR-A will be available with 2 lever options: standard and extended. The images that accompany this post show a prototype of the standard lever. The extended paddle will be just .09″ longer but because of how the assembly levers on the receiver itself, this little bit of extra length results in a lot of additional leverage. As is typical for Forward Controls Design, great care has gone into the shape of the lever with its shallow “V’ shape and serrations. 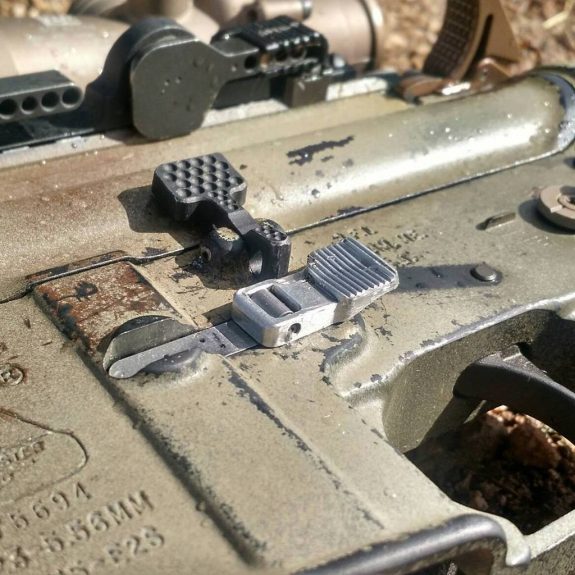 The EMR-A will also come with FCD’s new extra power magazine release spring. This spring offers 60% more resistance than the standard spring to prevent accidental activation of the magazine release. FCD has stated that their design for the EMR-A is not prone to accidental activation but they feel that the stock spring is underpowered. The spring is available for purchase separately.

You can expect the EMR-A to be available in a number of different bundles with either lever and the option to add one of Forward Controls Design’s EMR and EMR-C magazine release buttons. Stay tuned for pricing and availability information.