It doesn’t matter because I mount everything important on the 12 o’clock rail and chances are, you do too (or at least you could).

It’s All About the Top Rail

Think for a moment about what most shooters will mount on their fore end rail. You are likely to see a weapon light, a front iron sight, a sling mount, a weapon control item like a vertical grip or hand stop, and night vision devices in some cases. Let’s lay it out item by item:

Weapon Light – Your weapon light is one of the most important items that you mount on your fore end rail. I acknowledge that there is some preference involved in where your light is mounted but the most common mounting positions can easily be accomplished with an offset mount placed on the top rail. Alternately, you could try a 12 o’clock light set up that is completely contained on the top rail.

Vert Grips and Hand Stops – If you have a slick side KeyMod or M-LOK rail and you want a hand stop or vertical grip, I acknowledge that you will probably need to use a KeyMod or M-LOK compatible item. However, your rifle will function just fine if your hand stop falls off, which if you listen to the proponents of the other attachment method is likely to happen at any moment. So… it doesn’t matter.

Night Vision – This is lot like your front sight. Night vision devices are usually going to be on the 12 o’clock rail or, less commonly, some other FIXED rail position. 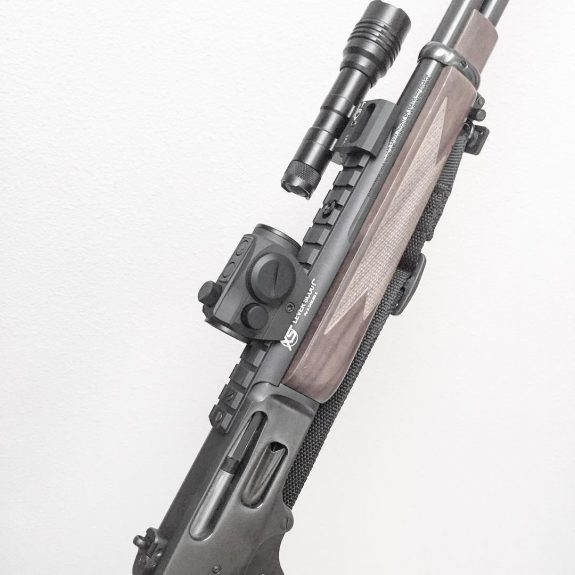 This Marlin 336 doesn’t have anything but a top rail but sling, light, and optic mounting is no problem.

It also might matter on shorter rails where space is at a premium. There may not be as much space on the top rail as you need to mount everything, especially with night vision devices. The flip side of this coin is that, on very short rails, you want to mount as much as you can on the top rail just to make room for your support hand to actually hold the rifle. 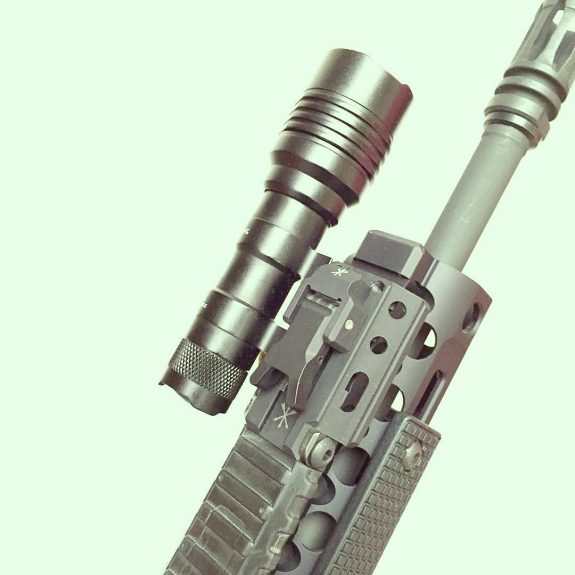 The Unity Tactical FUSION Hub keeps things tight on the top rail only.

How I Do It

I took a quick survey of the rifles I’ve used recently. Of the 10 with slick sided rails, only 3 have something mounted somewhere other than the top rail (or an integral sling mount) and those items could be easily moved. That represents a mix of KeyMod, M-LOK, and plain slotted tubes like the ALG EMR. It doesn’t include hand stops which, as we said above, don’t matter.

I have a lot of 12 o’clock light set ups. If I don’t mount the light at 12 o’clock, it is probably at the 10-11 o’clock position (from the shooter’s point of view) but mounted on the top rail. I use a couple Unity Tactical FUSION Hubs and a variety of offset mounts to achieve this.

Slings are usually mounted via the integral sling swivel cups found in most of my rails. In one case, I am using a Blue Force Gear UWL wrapped into an ALG EMR.

This ALG EMR doesn’t have KeyMod, M-LOK, or even an integral top rail. The light is placed on a short rail section at the 12 o’clock position, the sling is attached via the integral mounts, and the hand stop is a direct connect part from IWC.

Just a Means to an End

I am not trying to say that KeyMod and M-LOK aren’t good attachment methods. I have things that I prefer about both of them, I use both of them, and there are great manufacturers making great products for both of them.

They are both just a means to an end for me and that end is lightweight, slim, slick sided rails. I am not sure we would have as many choices as we do in this type of rail if isn’t wasn’t for these two attachment systems and I am thankful for that.

KeyMod versus M-LOK may never be truly settled… but it doesn’t matter to me and you shouldn’t sweat it either.