Armageddon Gear head honcho, Tom Fuller, is always bragging on the great ladies that make his company tick. They are Armageddon Gear’s secret weapons! Recently, they highlighted Miss Brenda on their Facebook page. She has been particularly important to the success of Armageddon Gear and has a great American story. 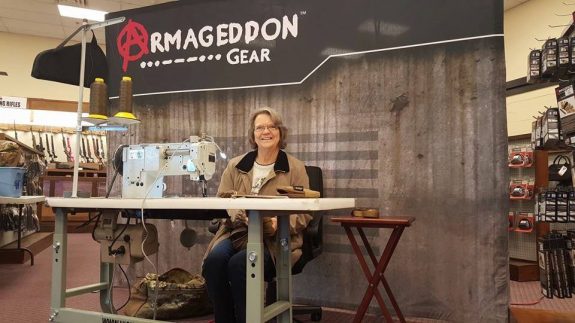 Miss Brenda, our Armageddon Gear Girl of the week, has quite the background. She started sewing her own clothes when she was 14, she got her first sewing job in 1973 and worked as a machine operator from then on working her way up to the supervisor in a sewing factory with over 200 machine operators until the plant was moved to China in 2005. She married her husband in 1970 and 3 days later he went to Viet Nam. He came home in 1971 after a year tour and they never spent another night apart the entire 44 year marriage!

Mrs. Brenda has hired all our operators here and runs a tight ship. She takes the quality of our products personally and passes that attitude on to all her employees. She has the utmost respect of everyone here at AG and we don’t tell her this enough but the truth is that if it weren’t for her, Armageddon Gear probably wouldn’t exist. And she can shoot a darn good smiley face on an IPSC target!

So maybe the best reason to never buy overseas produced, knock-off gear is because they don’t have Miss Brenda walking the production aisles making sure everything is done right.