With a name like Bootleg, it has to be good.

Bootleg Inc. is a sister company to PWS that was founded in 2015 “with a sole focus on Direct Impingement or DI accessories and builder education.” They offer a number of interesting products but their Bootleg Handguard is the focus of this post. It may look fairly standard at first glance but this handguard is packing a couple of very interesting features. 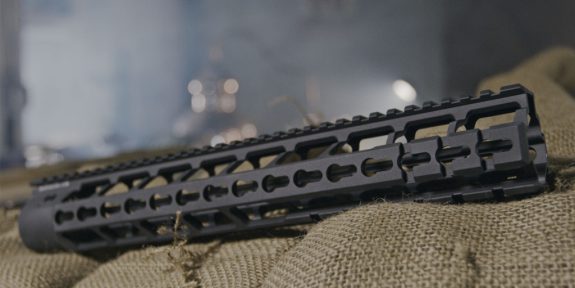 First, it makes use of the BCM’s KMR barrel nut and mounting system. This is a strong mounting system and there is even an aftermarket for it with companies like V7 Weapons making lighter weight versions of the KMR barrel nut. The Bootleg Handguard accommodates this by being available with or without the barrel nut which is a nice touch for those with already installed KMR rails or who plan to purchase an aftermarket barrel nut.

The other interesting feature found on this handguard is it’s “PicMod Technology”. This clever amalgamation of KeyMod and Picatinny rail allows either attachment method to be used on the same surface. The forward sections of the side rail are given this treatment along with an extended section of the bottom rail. The top rail is an uninterrupted Picatinny rail. 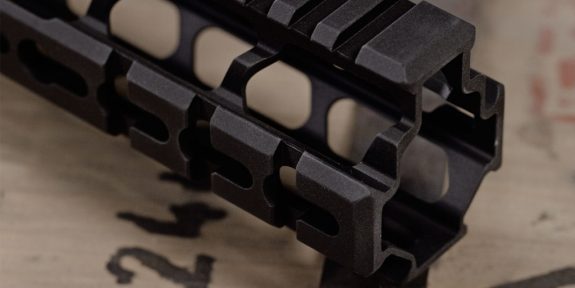 The Bootleg Handguard is fairly light in weight ranging from just 7 ounces for the 9″ version up to 9.6 ounces for the 15″ version including the hardware! This lightweight stems from its aggressively skeletonized, extruded 6061 aluminum construction. 9, 13, and 15″ lengths are available.

Check out the Bootleg Handguard at Bootleg Inc. While you are there, check out their other products too, including their very cool adjustable bolt carrier group that will be especially intriguing for suppressor owners.