Forward Controls Design recently released details of their patent pended, dimpled version of the ABC/R-F. It looks great (you can see a rendering of the 7.62 version below) but the details released are also an interesting window into the design process and the care that goes into it. 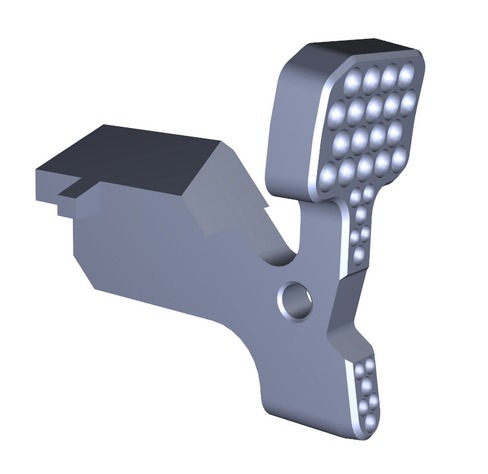 I already knew that it wouldn’t be as simple as replacing serrations with dimples. On the standard ABC/R-F, the serrations extend from the top paddle downward, and gives the user’s finger more serrated surface to press on.

On the dimpled ABC/R-F, we used different sized dimples on the paddles and stalk. Large diameter dimples for the top paddle, and elsewhere, smaller dimples. The dimples are rounded at the bottom, but they’re fairly steep dimples to provide better traction. We reworked the dimples dimensions and arrangement patterns several times until we were happy with it.

The 5.56mm version of dimpled ABC/R-F should be out in a month in limited availability. When the 7.62mm ABC/R-F comes out, it’ll have both the serrated and dimpled version.

The basic shape of the ABC/R-F is already designed to give the user tactile cues and now we can see the care that goes into extending these cues into even something as subtle as the surface treatment. I don’t know about you but I always find these types of peeks behind the curtain interesting.