SCAR owners must be ecstatic to see the arrival of Kinetic Development Group, a manufacturer devoted entirely to developing accessories for the FN SCAR (at least initially). Their latest piece of SCAR kit is the SAS or Scar Adaptable Stick System. 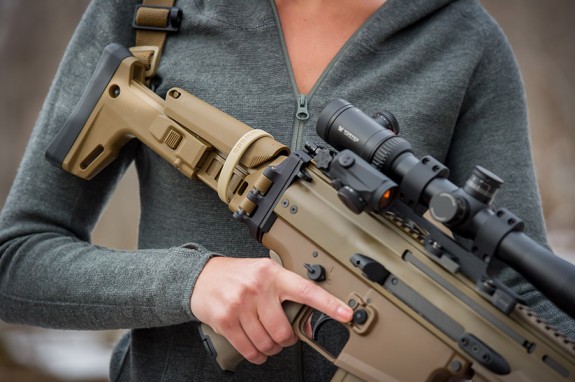 Just a few months ago, Kinetic Development Group launched its company with the promise to bring solutions to the small arms market for high quality firearms. They started with the FN SCAR as many SCARs are deployed with our Special Operations Forces.  They also recognize the 16S and 17S are increasingly popular with American shooters and law enforcement.

Their first products, the MREX (modular rail extensions) for the front end of the SCAR has been very popular.  The KDG front and rear sling points have also brought the SCAR into the year 2015 as far as QD sling solutions go.  Well, they have just addressed another common complaint about SCAR.  Some refer to it as the SCAR’s “UGG Boot” like stock system.  The KDG S.A.S (SCAR Adaptable Stock) is a serious improvement on the SCAR OEM stock system.

Form…. Why is this solution a near perfect marriage of a very well designed and reliable rifle and the excellent ergonomics of the Magpul ACR stock?   It doesn’t take a rocket scientist to compare the two stocks and decided which is more robust.  MagPul is famous for their reinforced polymers and most would argue nobody can beat them at their game.   There are many empirical reports from the field complaining about broken SCAR stocks.  To add to that strength is the KDG SAS coupling that is made of 6061 T6 aluminum billet that is black hard coat anodized.  That not only reinforces the stock, but also the open rear end of the SCAR’s thin extruded U-shaped receiver.  And to top it off, the KDG SAS assembled stock system weighs approx. ¼ pound less than the all polymer factory SCAR stock assembly!

Fit & Function… All SAS kits come standard with 7 positions of length adjustment, cheek weld height adjustment, an AMBI QD sling attachment point, a weatherproof battery compartment, and a side-folding feature. Like the factory stock, the weapon can be fired with the stock folded. KDG also added an optional set-screw to allow users the option to eliminate any play between the stock and receiver.

Aesthetics – There are many SCAR owners that are simply not fans of the factory SCAR stock. Its clunky feel and look take away from the amazing rifle they just purchased. The new SAS not only improves the function of the SCAR rifle, it looks a hell of a lot better as well.

Finally, the stock and adapter comes fully assembled from KDG. There are no tools required to install on your SCAR! The whole system retails for $299.00 and will be available for purchase at www.kineticdg.com or a dealer listed near you found on their website. www.kinetidg.com/dealers