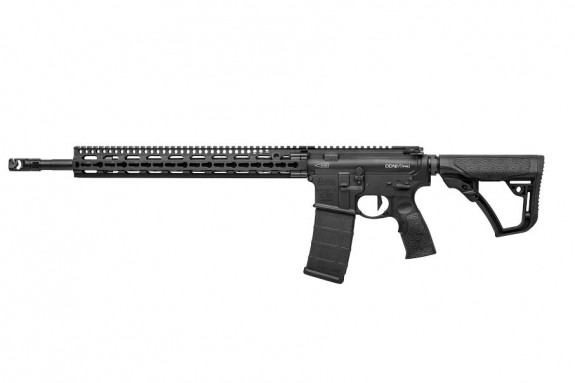 Further tapping into the shooting sports arena, the V11 Pro Series Rifle encompasses the core attributes athletes search for in a competition rifle.   “As more and more consumers begin to utilize the AR platform for competition, we felt it was the right time to release this version of our popular V11,” explained Jordan Hunter, Director of Marketing for Daniel Defense. Built around an 18-inch barrel and rifle length gas system, the V11’s competitive edge also stems from the lightweight SLiM Rail 15.0, GEN II Muzzle Climb Mitigator, Geissele SD-3G competition trigger and upgraded charging handle.

“The V11 Series rifles were released back in the summer,” continued Hunter. “Not only were they an instant hit, leaving with consumers as fast as they could be placed on the racks, it left us brainstorming on ways we could expand this model.” The answer came in the form of a precision rifle with the desired components for the 3-gun stage or other recreational shooting.

President and CEO, Marty Daniel founded Daniel Defense at the turn of the 21st century. From its humble beginnings as a start-up company, creating rails and accessories for the AR-15 platform in small batches, Daniel Defense has grown exponentially over the last decade, and is now known for its premium line of rifles and firearms accessories. Now with two locations and a combined 137,000 square feet of available manufacturing space, Daniel Defense looks forward to continued growth, as well as the opportunity to better serve their customers.