A new leader in the budget red dot sight race may have just emerged from the club house. Primary Arms just introduced their Advanced Micro Dot with Push Buttons and 50K Battery Life, MD-ADS. That name is way too long so I’ll just call it the MD-ADS. 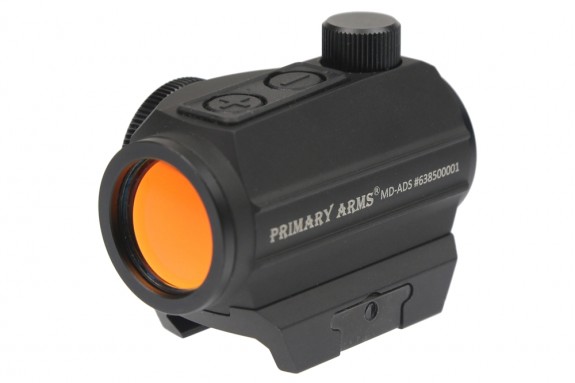 The MD-ADS is obviously based on the HoloSun HS403G that was released earlier this year based on the appearance, button interface, and 50,000 hour battery life (that’s right, 50,ooo!) but Primary Arms has made at least one noticeable improvement. They have moved the battery compartment to the side of the optic rather than the bottom so that it doesn’t have to be removed from its mount to change the CR2032 coin cell battery.

It should also be noted that unlike most budget red dot sights, the MD-ADS has a very low profile LED unit. It really doesn’t seem to project into the field of view at all which is nice if you ever need to use iron sights through the optic.

To top it all off, the MD-ADS can use any mount intended for use with Aimpoint Micros.