I have been using the new Magpul MOE SL Buttstock for several weeks now and it certainly seems like a lot of stock for the money. It feels durable but feelings aren’t quantifiable. I haven’t done any drop testing but I have mortered it a few times to see if it would loosen (it didn’t). Now Magpul has let out a few tidbits pertaining to the durability of this stock (and others that they make). 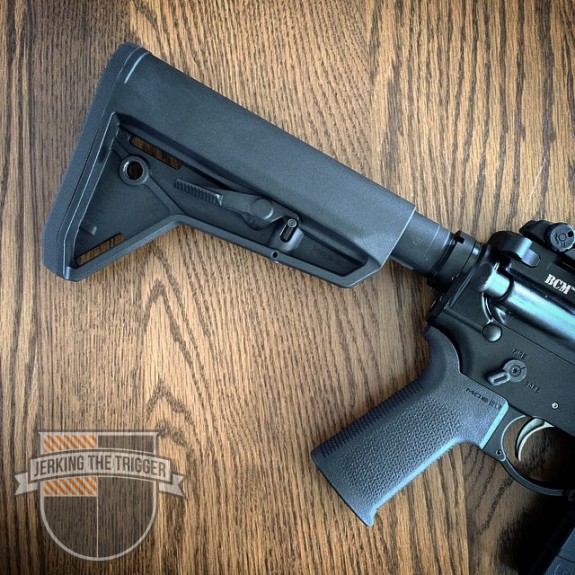 First, they switched to harder stop pins across the board “a while ago”. From Magpul Director of Product Management and Marketing, Duane Liptak, Jr.:

“We switched to harder pins quite a while ago across the board–new pins, new finish, harder (but still tough). Right now it’s a balance between what gives out first. We haven’t bent a pin to the point that it doesn’t function in SL testing, but we’ve sure buggered up a lot of buffer tubes. The polymer will eventually fail on our secret squirrel punishment tester, but predictably, and the stock generally remains usable. If something didn’t give, there ends up being significant buffer tube damage to the point that the stock won’t adjust or come off without sawing or prying. It’s pretty doggone stout. We also, as always, formulate for performance across the temperature extremes. Hot, cold, room, etc, where a lot of more “shock absorbing” polymer formulations end up testing poorly at elevated or reduced temps. Different philosophies.”

Second, Magpul had the MOE SL Buttstock drop tested by a third party and the results matched their own internal testing:

“Just wanted to drop in and update on strength testing for the MOE SL buttstock. Didn’t want to say anything until we had third party verification of our results, but we just started getting those. We’re passing 2 meter, multi-axis drops on a 10 pound rifle in all colors and flavors from multiple test evolutions, and doing it with ease. Pretty stout stuff.”

The above quotes can be found on M4Carbine.net.