I am extremely pleased to see several manufacturers bringing light weight AR-15 replacement parts to market lately. No one has developed more of these parts than V7 Weapon Systems. One of their most recent weight saving parts is their Ultra-Light Port Door. 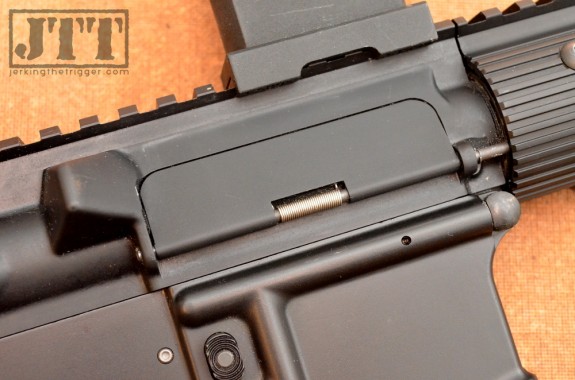 The V7 Ultra-Light Port Door is machined from 7075 T6 aluminum which is hard anodized for durability. It is a drop-in part that requires no modification to your upper receiver for installation.

The V7 Ultra-Light Port Door functions like a port door should. It opens when the bolt carrier moves past it and it stays closed when you push it closed. I have had no functional issues at all.

V7 machines a small notch on the back side of the port door that holds the long arm of the port door spring in place. The notch makes installation just a touch easier. This is a nice detail. 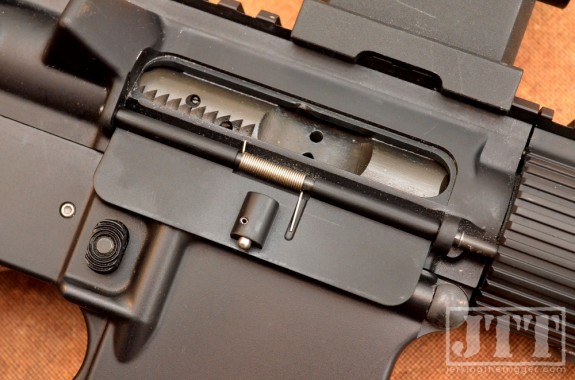 It is easy to look at these parts individually and write them off for only saving a few ounces here or a fraction of an ounce there. However, when you view these weight saving parts as a single piece in an overall weight saving strategy rather than an individual part, you can really start to see how pounds and ounces can be shed from a carbine’s overall weight. Parts like the V7 Ultra-Light Port Door can be especially valuable to this overall strategy because they can easily be installed on an already built carbine without requiring a rebuild like a new lighter barrel or hand guard might.

I should also point out that V7 makes an ultra-light replacement for the port door rod as well though I have not tried it.

There isn’t much you can say about a port door. It works, it looks nice, and it saves weight – those are all good things in my book.