Blue Force Gear has received a patent for their RED swivel! 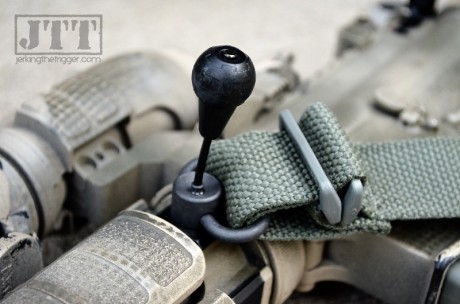 When seconds count, a pull-knob emergency release is more reliable to discharge than a tiny, hard to find push button.  For the times when you need your weapon and other combat equipment off seconds ago, you’ll be glad to have this on your gear.

“We realized that under stress the ‘Quick Detach’ push button simply wasn’t,” said Ashley Burnsed, Blue Force Gear’s CEO.  “Sometimes you need to get out of your gear rapidly and we found that a traditional push button style QD didn’t allow an emergency release every time.  The RED swivel does.”

The patented RED swivel releases with a 7lb pull straight out from the socket.  The chance for accidental release is minimized by the knob shape and the fact that a pull more than 10-15 degrees off axis will not release the connection.  If you work with a rifle over or near water, or in other conditions where sling entrapment is a substantial risk, the RED swivel can be a lifesaver.

The RED swivel can also be paired with the Burnsed Socket™ or push button Universal Wire Loop™ – both from Blue Force Gear – to make the fastest 2 to 1 point sling on the market.

Blue Force Gear® designs the best weapon slings and leads the lightweight equipment revolution with its Ten-Speed™ multi-use pouches.   They also reinvented MOLLE to be the world’s lightest with their revolutionary MOLLEminus™ technology and Helium Whisper™ pouch attachment system.  Unrivaled innovation and attention to detail set Blue Force Gear apart from others in the tactical equipment industry.