There is a school of thought out there that states that if you train the fundamentals of shooting by executing them slowly, over and over, you will be able to do them quickly should the situation demand it. The thought is essentially that speed will come automatically with the application of the fundamentals.

Practicing the fundamentals of sight alignment and trigger press are certainly important. They are called the fundamentals for a reason, But does slow paced training truly prepare you to be both accurate and fast? Does a sprinter train for the 100 meter dash by jogging? Yes, they do but you better believe they do plenty of full speed work outs as well. Does an F1 driver train for a race by cruising a parking lot? Maybe at some point in their lives they learned to drive in a parking lot and they continue to use those skills in their daily life but they aren’t prepping for a race that way.

The sprinter and F1 driver learn the fundamentals of their craft at speeds slower than race speed but they eventually progress to learning how to find the limits of their speed. Shooting is like every other physical or mental pursuit. Speed must be trained. It is not acquired through slow, rote repetition of the fundamentals. The fundamentals must be learned but then their limits must be found. 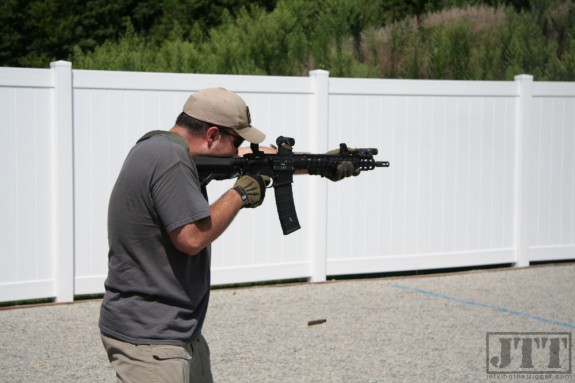 Finding some speed with 3 pieces of brass in the air…

Imagine that you are part of an experiment. You are sitting in front of a computer monitor and there is a big red button next to it. Every time you see a flash on the monitor, you are to press the big red button so that your reaction time can be measured. The experiment will be run two different ways. The first time the flashes will be completely random. The second time the flashes will have a longer duration, be spaced at regular intervals, and there will be a visual countdown before each flash.

I would wager that you reaction times will be much faster in the version of the experiment where the flashes come at regular intervals with the countdown because you can actually start to anticipate when to push the button rather than reacting to the flash.

Sight alignment and trigger press are generally considered the fundamentals of shooting. This is true whether you are shooting bullseye competitions, the action shooting sports, or training for self-defense. However, the fundamentals are not as static as they are sometimes made out to be. They remain the fundamentals but the techniques that support them are more fluid.

Sight alignment during a bullseye competition is going to be drastically different than sight alignment during an arms-length mugging in the middle of the night. When the situation calls for a more rapid shooting cadence, the shooter must know what an acceptable sight picture looks like because perfect sight alignment isn’t likely to be achieved. Even if a perfect sight picture could be achieved, it may not be prudent to take the time to achieve it. This is like having the longer duration flashes in the experiment. There is more margin for error than you think built into your sights, you just have to find out how much on the training range.

Further, in order to really start to find some speed, the shooter must learn how to track their sights through recoil. The sight becomes something like a gas pedal. Your ability to track and control it dictates how fast you can shoot. The shooter who doesn’t track their sight can only react to a settled sight picture. The shooter who can track their front sight can proactively prepare to break the next shot as the sights are still settling into alignment. This is analogous to having the countdown before the flash in our imaginary experiment.

Trigger press also differs as speed increases. The sprinter must train their leg muscles to move quickly and smoothly. The same goes for the shooter. That straight back trigger press that you use when shooting a dot torture drill has a common goal with the trigger press that you use when you shooting rapidly – to disrupt the sights as little as possible. However, these two trigger presses will be different in their speed and the ways the muscles are being used. You may even need to change the part of your finger that rests on the pad of the trigger in order to achieve a straight back press at speed.

So, yes, the fundamentals are still the fundamentals but they are being applied in an entirely new way that must be trained. You will not learn what an acceptable sight picture looks like or how to track your sights in the heat of the moment. You will not learn how to adapt your trigger press to the demands of speed in the heat of the moment. You must train at the limits of the speed (and even slightly beyond) that you are capable of in order to learn these skills and eventually find more speed. 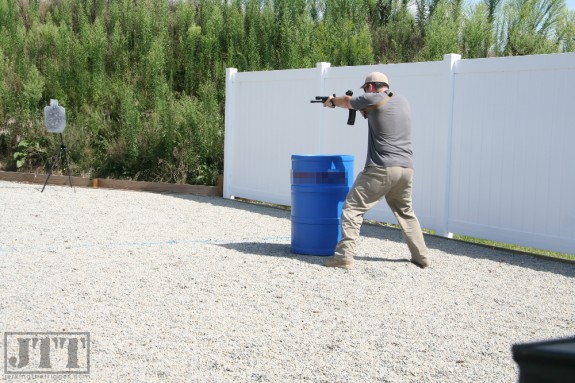 .22LR training firearms can be a great way to practice manipulations at full speed.

As speed increases, grip is elevated to fundamental status. It is tempting to say grip and stance become fundamental but I am not sure you can count on having a solid stance when things go sideways. You have more control over your grip.

Grip becomes fundamental because it is so vital to supporting the other two fundamentals of sight alignment and trigger press, especially in those fractions of a second after the first shot. A proper grip helps the shooter to press the trigger quickly with minimal disruption of the sights. A solid grip also absorbs and controls recoil while allowing the sights to settle in a predictable way. Sights that settle in a predictable way are kind of like the regular interval version of our imaginary experiment. If you can find the rhythm of the flashes or the sight picture, you can anticipate when to press the big red button or the trigger.

This is something that must be practiced at speed.  You simply will not learn how much speed your grip will allow until you test it at speed.

Wrap Up – Train Fast to Be Fast

If we have learned anything from the modern study of terminal ballistics, it is that the handguns that we carry daily, regardless of caliber, cannot be counted on to provide those mythical one shot stops. Due to this fact, the ability to take follow-up shots accurately, in rapid succession is likely to play an important role in surviving an armed confrontation.

Slow fire bullseye drills aren’t going to cut it on their own. You won’t find any speed until you go looking for it. Get a shot timer and head to the range to find your limits. A good rule of thumb that I have heard from several instructors is to set a realistic accuracy standard and then train to a speed that allows you to meet that accuracy standard 75-80% of the time.

If you are missing more than that, you are training too fast. If you aren’t missing at all, you can go faster.

It is simple. You can’t neglect the fundamentals but you have to train fast to be fast.

One Response to Fast is No Accident