The LITTLE BADGER comes with a halfway decent set of adjustable iron sights. In addition to the sights, you can mount optics to the “handguard” which is little more than 4 rails at the breech end of the barrel. It has a very minimalist wire stock and the entire rifle folds down to a roughly 16.5″ long package. The barrel is threaded for suppressor use. It is fairly light but still heavier than I would expect at 3.5 pounds according to the Chiappa website.

Minimalist .22LR rifles that are geared toward the survival market draw me like a moth to flame. The LITTLE BADGER, with it’s sub-$170 retail price, is affordable enough that it might not hurt too badly if I do get sucked in.

Check out Chiappa Firearms and the LITTLE BADGER. 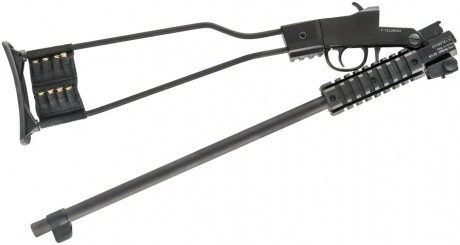