I recently reviewed RAND CLP and was suitably impressed. Apparently, I am not the only one.

Here is the release from RAND Brands:

Sergeant Major Kyle Lamb, retired US Army Special Operation soldier, and President of Viking Tactics/VTAC, has officially endorsed RAND CLPTM as the “most innovative and effective firearms CLP on the market.”

Sergeant Major Kyle E. Lamb (retired) spent 21 years in the United States Army, more than 15 of which were with a U.S. Army Special Mission Unit.  He served in several combat theaters including Mogadishu, Somalia, Iraq and Bosnia.  One of his last assignments before retiring was to torture test new equipment for the US Army Special Forces Operations, ensuring America’s best combat shooters had access to the most effective and innovative equipment.

RAND’s Vice President of Sales and Operations, Jon Miodonka, says “SGM Lamb is meticulous when looking for great products & technology and won’t associate his name with just anything.”

RAND CLPTM is manufactured and distributed by RAND Brands, a division of RAND Innovations, LLC of Westport, CT.  Developed by Mark Simonetti, a former Army Ranger and police firearms instructor, and using Nanotechnology as its platform RAND Brands has brought science and functionality together to create the perfect combination of a cleaner, lubricant and protectant.

RAND CLPTM burst onto the scene in February 2013 after officially launching at the SHOT Show (Shooting, Hunting, and Outdoor Trade Show) in Las Vegas.  After 6 years of research and development, RAND Brands unveiled RAND CLPTM as the best all-in-one solution for firearm maintenance and reliability.

Says SGM Lamb of RAND CLPTM, “As a Soldier and Firearms trainer, I constantly searched for a weapon CLP that was a step ahead, I never found it…that was until RAND CLPTM came along. RAND CLPTM is head and shoulders above any weapons CLP on the market.  RAND CLPTM answers all of my gun care needs.”  He continues to say “RAND CLPTM changes the way your slide and bolt feel.  They will be smoother than you ever imagined.”

Miodonka: “Working with Kyle and VTAC over the last 6 months has been an honor.  To have the Viking Tactics and VTAC logos on our bottle is a testament to the hard work and efforts that have gone into developing RAND CLPTM at RAND Brands over the last 6 years.”

Lamb: “There are hundreds of options when it comes to cleaning, lubing and protecting your weapon, but RAND CLPTM is the best option.” 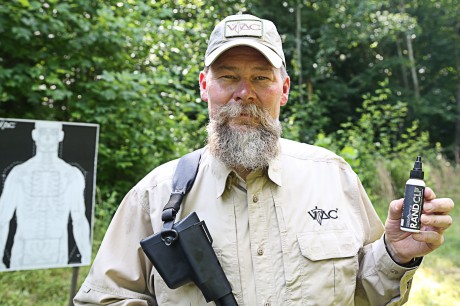