KNS Precision has released their new AK Adjustable Rear Sight. The new peep sight is fully adjustable for windage and elevation. It also comes with replaceable diopter inserts to customize your sight picture.

Crooked or canted AK front sight post got you down? No worries, we’ve got your fix! Our AK Adjustable Rear sight is FULLY adjustable for windage and elevation, allowing you to center your front sight post between the ears of the front sight post mount and make ALL of your zeroing adjustments with our rear sight!

Additionally, our rear peep sight allows for fast, precise target acquisition & engagement. We include 6 different interchangeable peep diopters that seal up snugly to the rear sight aperture via rubber o-ring. Simply select the diopter size that best suits your needs and you’re good to go!

I bought my first AK more than a decade ago.  At the time the Colt 6920 was the standard for AR’s.  They were hard to find in stock and expensive.  The wealth of information available regarding quality manufacturers outside of Colt was not there.  Exotic offerings such as the FAL were even more expensive to purchase and much more expensive to feed.  AK’s were plentiful, cheap, inexpensive to feed and, from a novice’s standpoint, simpler to learn.  The decision was easy for me.

Fast forward a few years and my how the markets have changed.  Colt 6920’s are plentiful and downright cheap.  The amount of other manufacturers bringing duty quality rifles to market continues to grow. Ammunition prices have dropped significantly for 5.56×45 as well.  Sanctions have stopped several once readily available AK’s from ever being imported again.  Prices have climbed dramatically.  The days of the $350 WASR are gone forever.  Prices for 7.62×39 have climbed so close to 556 that it’s nearly a wash between the two.  The pallets of cheap 5.45×39 that had been flooding our shores have all vanished.  These days the financial differences are gone.  I still run an AK because I choose to.

So what issues have I faced being that Special Snowflake with the Commie Rifle?  Well, good gear was one of them.  Surplus Chicom was and is still readily available but very utilitarian.  Russian gear is available as well but way overbuilt and overloaded for my tastes.  There is even surplus Bosnian/Serbian gear available.  It has more features and comfort than the Chicom stuff.  It wasn’t until I found the HSGI Taco that I had halfway decent kit to use.  Luckily guys like Extreme Gear Labs exist that know and run the AK and what is required to properly tote those curved mags.  VTAC and VCAS slings were readily adaptable to the AK once I was shown the wonder that is the two point adjustable sling.

How about accessorizing that Barbie?  Well the market for quality AK accessories has done nothing but grow.  One just has to navigate the low-end gear and find the good stuff.  Krebs Custom has always been my first stop for upgrading the AK.  The MKVI Enhanced Safety and a FCG Retaining Plate are on every rifle I own.  The last few years Magpul jumped hip deep into the AK game with furniture.  You can choose modern handguards from RS Regulate, Krebs Customs, SLR RIfleworks, Troy Industries, TDI Arms and Midwest Industries.  Stock adapters are available from Definitive Arms, Meridian Defense, TDI Arms, VLTOR and JMac Customs.  Seemingly everyone now makes at least one AK grip.  The most promising of such being the “Eighty Five” grip soon to be released by Echo Nine Three.  Even ALG Defense and CMC Products have come to the rescue with outstanding drop in triggers for the AK.  Definitive Arms, KNS Precision, JMac Customs and Rifle Dynamics have all created ways for dealing with the AK’s over powered gas system and tuning for running suppressed.

Iron sights on the AK are an acquired taste.  Although there are improved front sight posts from KNS Precision and XS Sights available.  Krebs Custom, XS Sights, GG&G and Circle 10 AK sell improved rear sights. Running optics is pretty standard on any modern carbine today.  Initially the Ultimak was the only option outside of surplus mounts/optics.  Luckily most ballistic/zeroing information for 300BLK is readily adaptable to the 7.62×39 round.  This means more optics compatible with the 7.62×39 ballistics.  Trijicon does make several ACOG models with 7.62×39 BDC’s currently.  Modern mounts from RS Regulate, Midwest Industries, Texas Weapons Systems, Attero Arms and Sabrewerks make running anything from a Micro RDS to LVPO a breeze.  I actually run an ACOG more than anything these days using RS Regulate mounts   They have held zero well enough to get consistent hits out to 300 yards.

A semiautomatic rifle isn’t much good without a quality feeding device.  Getting started there were two options, Combloc steel or ((10)) Waffle mags.  So you had heavy and sharp or really expensive.  Oddly the super tough steel Combloc mags have been the source of the only non-user/ammunition malfunctions I’ve experienced.  All it takes is a little dent (barely noticeable even) and the magazine follower can get stuck.  Nobody made a “pmag” equivalent until a few years ago when Magpul finally started making AK PMags.  Initial teething issues gave way to a very reliable, and gear friendly, magazine that’s pretty inexpensive.  I have six classes in the books with AK PMags and no complaints.  If only they’d make a D60 for the AK.  Are you reading this Duane?  Now XTech Tactical has jumped into the fray with a modern waffle pattern magazine.  It is available with or without a bolt hold open feature and soon they will offer a fully steel reinforced version meant for hard use.

What you feed it is important.  There is still a huge amount of range grade ammo imported from Wolf, Barnaul, Golden Tiger, Fiocchi and Sellier & Bellot.  SGAmmo is importing 8M3 into the US again after a long hiatus.  It is the only imported JHP that actually performs like a JHP on a consistent basis.  The Barnaul 125gr JSP under the Silver/Brown/Golden Bear labels consistently acts like a traditional cup and core soft point.  Premium ammo is available in the form of Hornady SST, Federal Fusion, Winchester PDX1 and Corbon DPX.  Engel Ballistic Research, Atomic Ammunition, Detroit Ammo Co., Barnaul (Brown Bear line) and Prvi Partizan/PPU currently produce commercially loaded subsonic 7.62×39.

What’s the most neglected aspect of firearms proficiency?  Training!  Now this was and still is the hardest issue to deal with as an AK Guy.  There isn’t a lot of AK specific training available outside of former Spetsnaz or instructors we won’t name.  Tiger Valley, Larry Vickers, Steve Fisher, Cause & Effect and Ken Allen Training all offer or have previously offered AK specific classes.  There are other instructors out there for sure.  I have been flat out told “No AK’s” more than once and several others said everything but “no” to make sure I was discouraged from signing up.  The instructors that said yes ranged from “I’m sorry I don’t have anything AK specific to offer you” to “I don’t care what you shoot, I’m here to teach to you to use it better”.  I can say my experiences training with Sage Dynamics, CSAT, Presscheck Consulting, SOB Tactical and Ken Allen Training have all been positive.  I do get odd looks at nearly every class. The questions from other students vary from genuine intrigue about the platform to disgust that I would bring such an abomination to class.

I kind of get it.  Pretty much every procedure for the AK is vastly different from the AR.  Double feeds for example.  Upon recognizing a dead trigger I bring the gun back to the chest palm up, I remove the magazine with my support hand, I re-grip the handguard with the support hand, I use my firing hand to pull back and hook my thumb across the back of the receiver to keep the bolt back and then stick my first two fingers into the magwell to dislodge the stuck rounds.  Once cleared I grip the handguard with support hand again and release my grip on the bolt handle, letting it go forward.  I re-acquire a grasp on the pistol grip; my support hand reaches for a fresh magazine and rocks it in.  Support hand reaches under the gun to rack the bolt, hopefully delivering a fresh round to the chamber.  My support hand goes back to the handguard, so I can shoulder the rifle, assess and fire if necessary.  Depending on the instructor that might mean a little extra time spent not shooting for the class to be able go over special instructions with me.

Start with a quality rifle.  AK’s are like AR’s in that build quality matters.  The much maligned WASR and Romanian/Cugir variants get a ton of hate.  While some of it was well earned years ago the Cugir factory in Romania has tightened up quality control and improved their product.  The guns built in the last 6-7 years have improved fit and cosmetics.  The XXXXX-XX RO indicates a totally new production gun and year of manufacture.  No more are the demilled guns remanufactured and resold.  Arsenal has had a fairly solid reputation.  VEPR’s once readily available are banned from future import but still out there.  Older Norico MAK90’s still hide in pawn shops and estate sales.  Despite all this you need to know what you are looking at.  There are several good YouTube videos on what to look for before purchasing an AK.  Rivets, magwell fit and alignment of rear sight block, gas block and front sight block are all very important.  Rifle Dynamics and Krebs Customs both put out high end AK’s with an attention to detail.  They do some things a little differently than the imports and aren’t for everyone’s taste or budget.  Definitive Arms is putting out some excellent traditional and modern builds for customers.  Sharps Bros even offers a modernized milled receiver for builds.  The Galil ACE is an AK at heart and offers a solid option in 7.62×39, 5.56×45 and 7.62×51.

There certainly are some AK’s on the market to avoid.  My glass is half full so I’m going to stay positive with this article.  Do your research about which imported guns have had repeated issues with poorly heat treated receivers.  Read up on which American built AK’s have had issues with cast trunnions failing and poorly heat treated bolts losing headspace and becoming dangerous.

What have I learned after eleven thousand rounds through the AK?  Well the AK is more accurate than most people believe.  I had a clean run on the CSAT Scrambler using an Arsenal SAM7SF with Trijicon TA33 and Russian steel cased ammunition.  The AK isn’t infallible.  Bad primer, dented mag or loose nut behind the trigger will certainly induce a malfunction.  There are great guns available.  There is aftermarket support for them.  Quality is there, but you have to pay for it.  Overall I still enjoy the AK enough that I don’t see a change happening anytime soon.

Brandon Hizak is a former police officer and now full-time paramedic. His hobbies include fitness and firearms, especially AKs, revolvers, and big-bore rifles. You can follow Brandon on Instagram to keep informed on his latest adventures.

Now this is a handy widget!

If you just build an AR-15 or two every once in a while, this might not be necessary. If you are building or rebuilding them frequently, the new Hammer Cage from KNS Precision might just slow the rate at which you fill your swear jar. Simply put, the Hammer Cage takes the spring tension off of the hammer which makes installing (and removing) the hammer pin much easier. 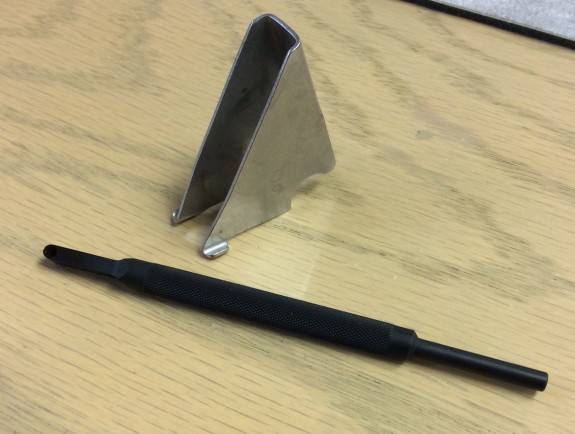 KNS Precision announced that they will produce a full suite of a replacement front sight options for Magpul’s MBUS Pro Sights.