The ABC/R, an improved bolt catch, is the latest from Forward Control Designs. This bolt catch is absolutely packed with subtle improvements, the most noticeable of which is the increased size of the paddle. This makes it a larger target for your thumb or palm during a reload. 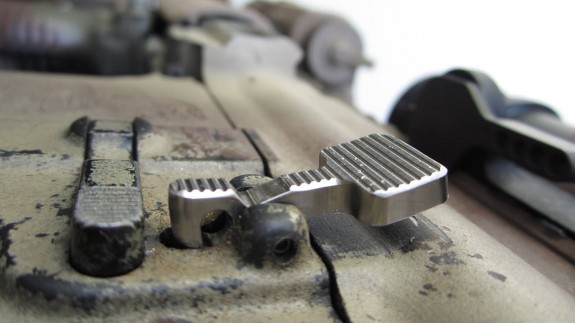 The most subtle improvements are the angles. The ABC/R is designed to give the user tactile feedback even if they can’t see it. The paddle itself is angled forward at 10 degrees. The lower portion of the paddle is angled at 5 degrees. These angles allow you to feel the transition to the lower part of the bolt catch.

The ABC/Rs shown in the pictures are prototypes that have not been finished. Production units will be more refined.