Elite Tactical Systems Group is bringing a interesting new AR-15 magazine to market. Their AR15 Magazine, 30 Round With Coupler has a few features that I haven’t seen applied to AR-15 magazines before. 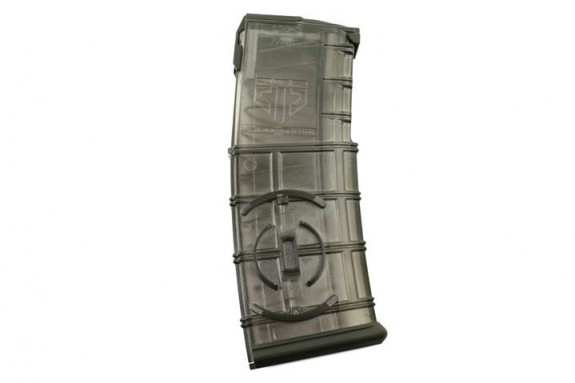 The most notable feature is the coupling functionality. The magazines can be easily linked together in a way that is functionally similar to Sig 551 magazines though the locking method is different. The placement of the locking structures cause the magazines to be staggered which keeps the spare magazine well clear of the ejection port. There is no limit to how many of the mags can be linked though I would probably stick with just two.

There are other clear magazines on the market but ETS Group seems to be taking a different approach to correct the chipping and cracking issues that often plague clear magazines. Rather than adding metal reinforcement, they are using a polymer that is more flexible than most clear polymers and claim that their magazines are more durable than other notable polymer magazines. Hopefully, this is found to be true in independent testing as well.

These magazines also feature a removable dust cover and a very easily removed floorplate. They are also available without the coupler functionality.