The FACTR USA Stiffy is a “transportation and storage device that fixes your flaccid pistol brace problem”. This high-strength nylon stiffener fits the SB Tactical SBA3 brace simply by loosening the strap, inserting the Stiffy, and retightening.

The Stiffy is available for pre-order now at FACTRUSA.com.

If you own an AR Pistol, there is some important new information for you to digest. Prince Law has done their usual excellent job of breaking down this latest ATF letter and it is an important one as it fundamentally changes the way we measure overall length. In a nutshell, the new ATF position seems to be that the brace does not count toward the OAL measurement, and the measurement will now be taken with the stock folded where applicable.

Strike Industries seems to be going all in on AR pistols. They recently opened pre-orders for their Viper PDW Brace and now they have introduced another brace option at a value price – the AR Pistol Stabilizer.

The AR Pistol Stabilizer is designed for use on smooth buffer tubes with a outside diameter of 1.25″. It locks onto the tube via a set screw and features ambidextrous QD sling swivel sockets. This brace also features a fixed sling loop for those who do not want to use QD swivels.

Trinity Force will release a new pistol brace called the Breach Pistol Brace. It is designed to clamp onto a 1.25″ diameter pistol buffer tube and features multiple sling attachment slots. Like the Shockwave Blade Pistol Brace, a brace to which this is likely to draw comparisons, the toe of the Breach is very slim in keeping with its purpose as a forearm brace and not a stock.

The Breach Pistol Brace will be available soon. Stay tuned for additional details. 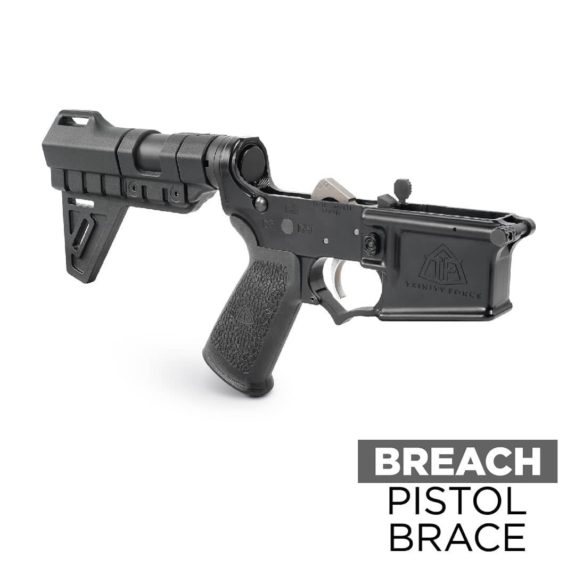 SB Tactical is to be commended for continuing to press the issue with the ATF. Their Pistol Stabilizing Brace products are not only important for disabled shooters, they have also served as a rallying point for the discussion of the shortcomings, inconsistencies, and obsoleteness the NFA. They are doing important work on behalf of gun owners everywhere.

If you own a brace product, you are right to be smiling today. This is a victory. However, you should realize that this decision (read the decision letter at The Firearm Blog) is likely specific to the SB Tactical line of products due to language describing how some braces can be attached in such a way that adds length. The ATF appears to see this type of functionality (the ability to add length) as serving “no other purpose than to facilitate use as a stock”.

I’ll say it again… This is a victory. It is encouraging to see the ATF roll back a nonsensical, indefensible, and unenforceable decision regarding the shouldering braces. In that sense, it has provided some clarity on one specific product. However, the pistol brace marketplace has more than one player. This decision may have thrust us further into the murky waters of confusion by drawing what seems to be a potential new distinction between braces that slip on and those that attach somewhat permanently with the ability to add length.

Did the ATF just draw a distinction between various kinds of braces based on how they can be attached? Can we expect to see an opinion paper clarifying their position on braces that can be used to add length? I am not a lawyer but this would appear to lead back to the same sort of argument that just exonerated the SB Tactical Braces. Do owners of braces like the Shockwave Blade who attach the brace in such a way that adds length, “redesign” the pistol into an NFA item?

The relationship between gun owners, pistol braces, and the ATF continues to be a dynamic one. I expect that this decision and the distinctions that it appears to draw will create more questions (and likely more confusion) in the near future.

Both Shockwave Technologies and Gear Head Works have now made statements that the ATF has clarified that their products may be shouldered too.

You can read the Gear Head Works statement on their Facebook page: https://www.facebook.com/GearHeadWorks/posts/1013098225489804

Shockwave Technologies posted their statement on their website and it includes clarification on the “permanent attachment” and “length of pull” issues: http://shockwavetechnologies.com/site/?p=3524

Hopefully, a letter covering the contents Shockwave Technologies’ findings will be issued soon.