SEMA 2018 finished last week, wrapping up the first year of B.E. Meyers & Co.’s participation in one of the world’s premier auto shows. While SEMA may seem an unlikely place to find a laser manufacturer, B.E. Meyers & Co., who is known for innovative defense and aerospace solutions, had something truly unique to share with the automotive industry. The “MAWLR”, a Lexus LX570 that B.E. Meyers & Co. and Defconbrix transformed into the ultimate overland vehicle, was unveiled at SEMA in the Toyo Tires Treadpass. It is extremely rare to see an LX570 configured for off-road use, and none have a story quite like the MAWLR’s.

When Sean Jennings of Defconbrix picked up the Lexus LX570 from B.E. Meyers & Co. in Redmond, WA last February, it was a completely stock vehicle with a long way to go before it would become the MAWLR. The Lexus had belonged to the late founder of B.E. Meyers & Co., Brad Meyers. To honor Brad’s adventurous spirit, and his legacy of ingenuity, Matt Meyers, CEO of B.E. Meyers & Co., decided to turn the LX570 into a project build with a unique vision. The MAWLR would parallel the qualities that make B.E. Meyers & Co. products successful, specifically the MAWL® (Modular Advanced Weapon Laser). 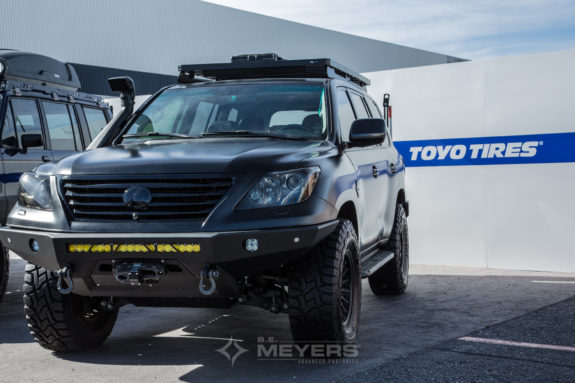 As a company that focuses primarily on laser systems for night operations, the B.E. Meyers & Co. team needed a vehicle that could navigate the rugged Pacific Northwest terrain in low-light, and no-light conditions. The MAWLR is purpose-built to transport equipment to remote destinations for product demonstrations, testing, and photo shoots.

The MAWLR is weapon ready, equipped with a TruckVault with designated space for rifle platforms, laser systems, and accessories. A large roof rack easily accommodates additional gear in travel cases.

Custom armor, all-terrain tires, and all-wheel-drive ensure the MAWLR can make it from point A to point B in the varying climates of the Pacific Northwest. The MAWLR can transition from Washington’s snowy mountain passes, to wet rainforests, and sandy deserts, all without breaking a sweat. 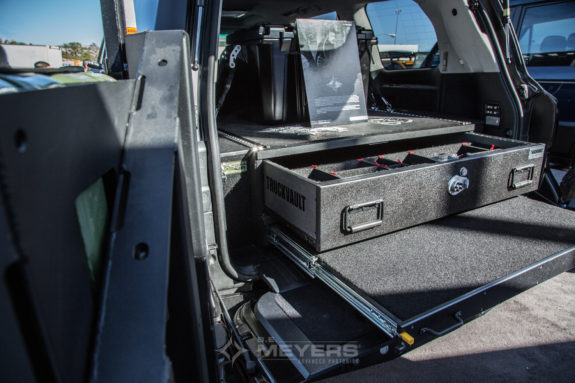 Whether demonstrating the latest laser technology, or shooting machine guns on a photo shoot, the B.E. Meyers & Co. team can often be found making magic happen during hours of complete darkness. Extensive aftermarket lighting on the front and rear of the MAWLR provide the lumens necessary to navigate to and from remote destinations at night.

B.E. Meyers & Co. and Defconbrix will be revealing the official build list once the project is officially completed.

The B.E. Meyers & Co. MAWLR build by Defconbrix can be followed on Instagram (@the.mawlr), and Facebook (@mawlr).