February 19, 2018 (Redmond, WA) – B.E. Meyers & Co., Inc. will be exhibiting its full range of laser and flash suppression solutions for military and law enforcement applications at Enforce Tac in Nürnberg, Germany 7-8 March, 2018 in hall 11.1 at booth 137. The company will be showcasing its full catalog of products, including: the MAWL, GLARE, and IZLID series of lasers; as well as the BOARS-M2 modular optic and accessories rail for the M2 platform. 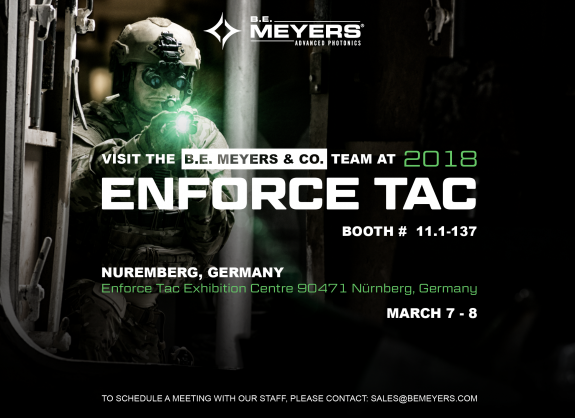 The B.E. Meyers & Co. MAWL family of individual carbine lasers have been designed from the ground up to meet the needs of the modern night fighter and is currently used by Special Forces groups across the world, including the French GIGN. Understanding the shortcomings of common laser devices in use with both military and law enforcement, B.E. Meyers & Co. built the MAWL with three ideal settings (Close Range, Mid Range, and Long Range) which allow for seamless transitions in any operational environment. The MAWL-DA (Direct Action, class 3B) and MAWL-C1+ (Class 1+) feature high powered near infrared and visible green aiming and illumination capabilities. The MAWL-CLAD (Covert Laser Aiming Device) distinguishes itself from other MAWL variants through the inclusion of a Short Wave Infrared (SWIR) laser pointer. Every MAWL features cutting edge Vertical Cavity Surface Emitting Laser (VCSEL) technology to provide consistently superior NIR beam quality and clarity, as well as a significantly greater illumination range.

The IZLID® series of NIR and SWIR laser pointers/illuminators are versatile and dependable. They allow Special Operations and conventional forces to clearly and precisely communicate with to other assets both in the sky, and on the battlefield. Primary applications include marking, pointing, targeting, and illumination. The IZLID series of lasers can be used as handheld units or mounted to various weapons systems or aircraft.

In response to the need for a modular, compact optic mount for the M2 platform, B.E. Meyers & Co. developed a revolutionary low profile mounting solution, the BOARS-M2™. It offers a modular, quick-disconnect system with true return-to-zero reattach, and a pass through aperture for use with iron sights. The BOARS-M2’s low profile form factor increases operator survivability by lowering the end-user defilade.

B.E. Meyers & Co., Inc. is a family owned business that prides itself on serving the needs of the warfighter with passion, ingenuity, and innovation. They design, engineer, and manufacture optoelectronic and defense solutions for the U.S. and her allies, specifically for those who are forward in the fight, both today and into the future.

The company’s core capabilities include visible, IR, and SWIR laser systems for pointing, illuminating, and Hail and Warning. These technologies are integrated onto various platforms including: crew served weapons, individual weapons, and fixed/rotary wing aircraft. Customers include all branches of the U.S. Military; Federal, State, and local law enforcement agencies; foreign defense and security organizations; and defense contractors worldwide.

Established in 1974, B.E. Meyers & Co. is an ISO 9001:2008-certified manufacturer of optoelectronic devices. Its business offices, engineering, and manufacturing operations are located in Redmond, Washington.

For more information about B.E. Meyers & Co., Inc. and their products visit www.bemeyers.com.