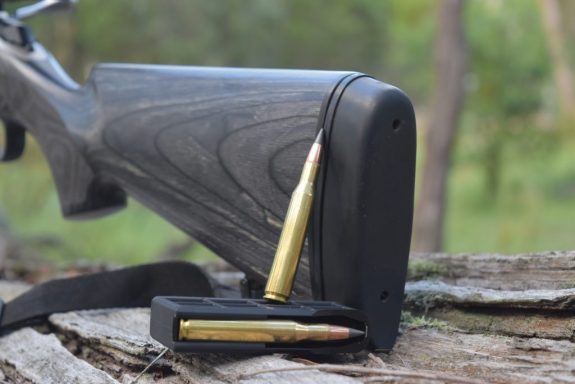 CHEHALIS, WA – November 1 – SATECH, Inc, the creator of the patented SmartCells Cushioning Technology, announces an exciting adaptation of their technology into a recoil pad. Currently made for selected model lines of Tikka and Sako rifles, SmartCells Recoil Pads are produced in Chehalis WA and are available for sale as of November 1, 2017. SmartCells recoil pads are designed to provide significant recoil shock absorption and have been shown to effectively improve shooters’ comfort over many leading recoil pads in the market today.

“At SmartCells we are all about solving life’s painful problems” said Chad Lindstrom, VP of Marketing for SATECH, “Our Recoil Pad contains Patented SmartCells Cushioning on the inside, which is intentionally designed to resist bottoming out and absorb painful recoil forces. Those who have tested the SmartCells recoil pad report a significant reduction in felt recoil force, which has helped them improve gun control, extend shooting sessions and provide greater focus on their target.”

Testers of the new SmartCells recoil pad technology include G.I.A. Tactical of Australia.   According to David Giacosa, G.I.A. owner, “The SmartCells Recoil Pad not only outlasted the competition, but gave me greater confidence in my shooting session. Shooting .308 caliber ammunition, SmartCells outperformed my previous pad by allowing 23 shots downrange before  reaching the limit of discomfort, compared to only 18 rounds downrange with my previous aftermarket recoil pad. This is a game changer for me!” said David.

Visit www.smartcellsrecoilpad.com for more information on this revolutionary new product.