The new Missile Strike from TOPS Knives is now available. This combat knife was initially shown at SHOT Show earlier this year and has been teased a few times since. 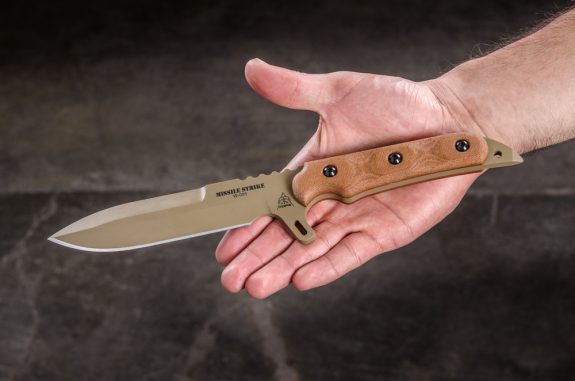 Kelly McCulley spent seven and a half years in the US Army. During his time in the service, he searched for the right knife to meet his needs as a combat tool that could do the duty of a utility knife, too. In all his time in the service, he never quite found the one that would fit what he wanted in a combat knife. Sound familiar? It’s one of the same reasons that TOPS Knives was founded and one of the reasons that TOPS produces such a variety of models. Around 2010, Kelly started designing knives that his fellow servicemen and women could rely on as they were deployed. He has been making those knives since and has some smart designs under his belt.

The Missile Strike is a great combination of combat and utility. Its narrow blade with long swedge allows for great penetrating stabs (the swedge can be sharpened upon request). The 1/4” thickness provides enough weight to add some power in stabbing, slashing, and when smashing using the pointed pommel. There is a very generous finger guard to ensure that your hand will not slip onto the blade.

Given that the knife will likely be used as a utility tool more often than not, there are features that were included to facilitate that use. The comfortable Micarta handle scales will stand up to use and provide excellent grip. There is a choil so you can choke up for finer tasks, and it’s made from 1095 steel, which holds a great edge, and is easy to re-sharpen in the field (a must for those who don’t always have a proper sharpening system handy). It comes with a tan Kydex sheath that has great retention, but still allows for a solid grip from the moment it’s drawn.

Check out the Missile Strike at TOPS Knives.