I know a handful of you have been waiting for this announcement. B.E. Meyers & Co. Inc. is bringing the MAWL to the commercial market with the release of the MAWL-C1+! Read on for details. 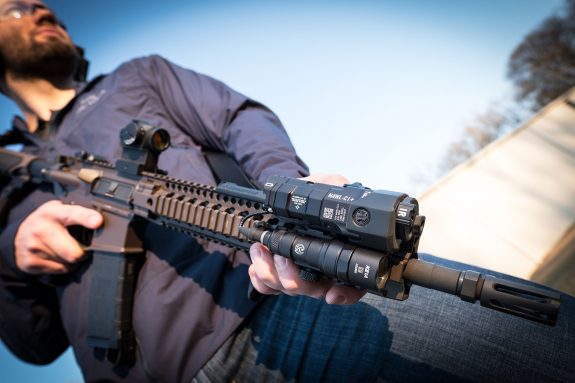 The Commercial Market Spoke, and We Listened

Since the release of the MAWL-DA™ laser device to the military and law enforcement community in 2016, B.E. Meyers & Co. Inc. has received numerous requests for a civilian legal variant of the MAWL™. Today we are proud to be able to support these requests by introducing the MAWL-C1+™ commercial laser device. The C1+ variant is not the typical “Class 1” laser device, and this is the first time that a laser illuminator is available to the shooting community that is not only functional for night target engagement at distance, and exceeds the performance of other commercial systems.

The MAWL-C1+ has all the sought-after ergonomic design features of the MAWL-DA, allowing for quick operation in the dark and on the move. In under a second, using only the tip of your thumb, the laser can be manipulated from near to far and back again between short range, mid-range, and long range specific settings. With low-profile activation buttons centered at just 0.37” above the rail, the MAWL design offers an unparalleled combination of range adjustment and speed of use.

Class 1 Plus™ = Irradiance on Target

The power balance of infrared illumination and pointing irradiance at different ranges becomes critical as commercial night vision quality continually increases, which is why MAWL-C1+ brings settings specific for close range to long range target engagement. By utilizing a uniquely arrayed laser core, the MAWL-C1+ is able to incorporate a laser illuminator capable of outperforming other civilian legal laser systems on the market, and also outperforms many restricted devices. This provides the user with a distinctive and functional near infrared illuminator with unrivaled irradiance on target, allowing for positive identification of objects, the ability to surpass many photonic barriers, as well as faster target acquisition either on the range or in the field. On top of this, the visible green laser pointer in the MAWL-C1+ has selectable low-power settings for close range boresight precision that is also slaved to the near infrared pointers. Once the user has zeroed the visible green laser, the infrared lasers are also automatically zeroed, getting you into the field faster at night. By featuring centralized, co-aligned emitters, the MAWL ensures that all beams are simultaneously on target, regardless of distance.

Our beam is our brand, and the incredibly smooth illumination quality of the MAWL-C1+ is the same as in the standard MAWL-DA, eliminating the distracting artifacts (a.k.a. greasy fingerprint spots) that many civilian and restricted laser devices possess. Not only does this clean energy performance improve your illumination of the target area, it makes low Figure-of-Merit (FOM) night vision devices look better by providing increased ambient and directional near infrared illumination.

Use What You Already Own

The MAWL is designed to be the best laser on the market, and works with and compliments a variety of other high-end systems. The MAWL-C1+ is designed to work with all MIL-STD/NSWC Crane Laser Lead remotes, which include the Unity Tactical/TNVC TAPS™ and TAPS Pro™ series remote cables, the SureFire SR07-D-IT, as well as L3 and Steiner remote activation cables. In addition to this, the MAWL series are designed to work in parallel with the SureFire M300 Mini-Scout Light® to maximize rail space efficiency.