Griffin Armament started as a silencer company, became known as a leading muzzle device manufacturer, grew their brand further into a full fledged AR-15 accessory source, and now their growth is reaching its logical next evolutionary step – complete carbines. 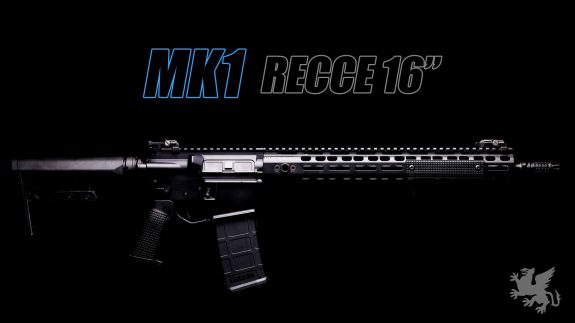 Griffin Armaments’ MK1 rifle line which has been in development the past couple of years is complete.  The MK1 series is a direct impingement line of signature rifles.

“Like most serious end users, we’ve been using and building AR’s as a hobby for the past 20 years.  We wanted to ensure our rifles were a turn-key fully featured firearm, meaning the end user doesn’t have to buy 4 or more different parts and own the rifle in a semi-complete state for months before it feels mission ready.  We’re proud of designing and integrating into these guns, a complete package of upgrade features.” -Austin, Lead engineer and primary owner of Griffin stated. He continued, “From a business perspective, we are also aware that the current AR market is extremely competitive, which is why we wanted to offer an unbeatable combination of quality, performance, and features at a great price.  Offering value is something that Griffin customers have come to expect from us, and we are happy to deliver it in this signature line of AR’s.”

Many components of the Griffin rifle represent individual, often lengthy, design and engineering projects.  Thousands of design and developmental hours were spent to ensure a proper ratio of performance and features versus cost.

“ We formerly developed a fully featured rifle for another respected industry company, so our performance expectations were abnormally high at the beginning of this project.  The MK1 project developed a rifle system that resulted in a few meaningful patents, and a firearm that several of our employees wanted to own, which is typically a good indicator of success.  When you put a product in a person’s hand and they feel an immediate desire to own it, that’s the hallmark of a successful project.”

Griffin’s MK1 line includes 4 models and for a limited time is offering an introductory 10% off promotion. Customers can option their preferred furniture color and silencer mount model.