Hopefully you are familiar with the concept of TacPack by now. If not, you can read the reviews of the previous TacPacks for some background. I recently received the June TacPack and this one had some big time potential, especially for a lucky few. Here are the details… 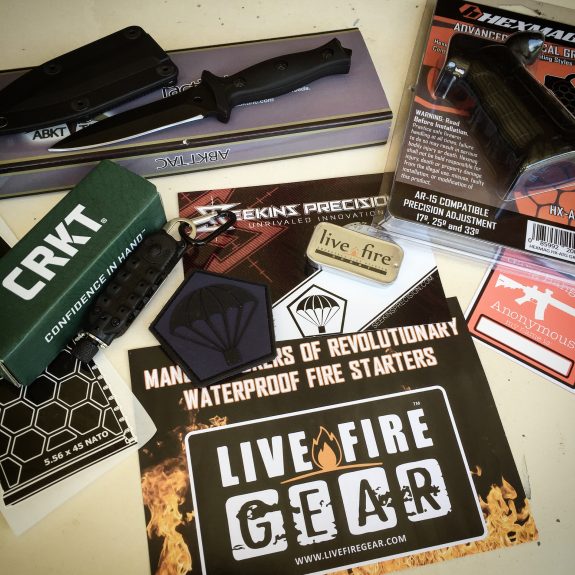 HexMag Advanced Tactical Grip – This grip features the well known HexMag hexagon pattern and is adjustable for grip angle (17, 25, and 33 degrees). It feels nice in the hand, looks good, and seems to take stippling well which is good because it feels a little slick.

Live Fire Emergency Fire Starter and 40% Coupon Code – Live Fire’s fire starting products are excellent. If you received the June TacPack, I suggest you use the Emergency Fire Starter as a chance to try out Live Fire. Then go buy several more with the included 40% off coupon code to tuck away in your packs, vehicle kits, and where ever else you need them. This is a really nice intro to some great gear.

ABKT Boot Knife – This is going to be one of those toss-it-in-a-kit-and-forget-it items for me. It is a cheap knife but the sheath seems to hold the knife well, the edge sharpened well with just a few passes on a stone, and it should be right at home as a cheap beater that I won’t cry about when I break it while throwing it at stumps. This is really the first inclusion in a TacPack that has fallen flat for me.

CRKT Getaway Driver – This little gadget is great. It’s core functionality is as a screwdriver but it carries standard screwdriver bits on board allowing you to swap the bits as you see fit. You could match the bits to the fasteners you need and then tuck it away on your gear, on your bike, in your range bag, or anywhere else you might need. It will even open your bottles. This thing is useful.

Seekin Precision Post Card of Winning – I wasn’t sure what to call this but it is a scratch-off card and a solid inclusion. Several of these cards will be instant winners of gear from Seekins Precision. Every other card will be a discount code that has the potential to save you some serious coin – well over $100 on a complete upper.

Stickers – There were two stickers included in the box. My tool chest will be sporting them shortly.

The boot knife fell flat in this one and a lot of the value of the box is in the coupons which some may not like. That is the nature of these boxes and the surprise is part of the appeal. I’ll use the coupons and get pretty good value out of them. The Getaway Driver is something I never would have purchased for myself but after getting one in this TacPack, I like it so much that I bought another one. The Seekins Precision winners and those who received the coins are probably dancing the streets. Those are some very cool giveaways.

Check out TacPack and get in line for the July box which promises to have some big time giveaway items from Bull Moose Tactical.