Zulu Nylon Gear just released a very interesting new AK magazine pouch. It features their reverse flap design that was debuted on their M4 Double pouch. The new AK Double Magazine Pouch also orients the magazines with the inward part of the curve forward (rotated 90 degrees from the norm).

It is the way that these features work together to accomplish the design goal that makes these pouches so interesting. These features all come together to allow you to carry your magazines in a bullets-up orientation which smooths and speeds AK reloads. The flaps cover the magazines to prevent loss or shifting of the top rounds in the magazines. Once released, the flaps “automatically” clear the pouch and remain clear. By turning the magazines so that the inner curve is forward, Zulu Nylon Gear is able to better fit the pouch to the magazines (I suspect that this orientation also makes the reverse flap design work better as well).

The pouches are meant to be mounted higher on the user. Think plate carrier or chest rig instead of “battle belt”. One potential down side that I can see is the increased profile caused by the magazine orientation. I am looking forward to putting hands on these to see if the potential benefits of such a pouch outweigh the increased profile. Stay tuned for a full review.

You can check out the new AK Double Magazine Pouch at Zulu Nylon Gear. 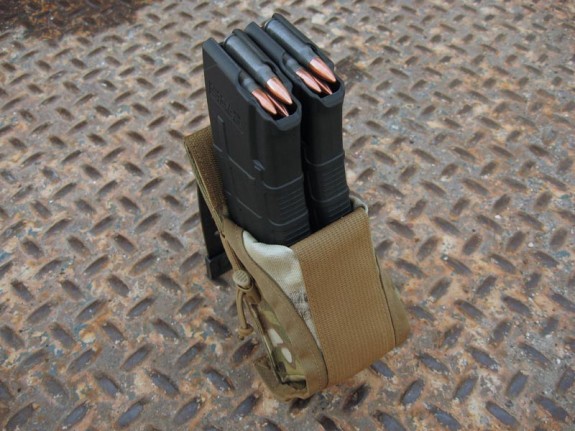