A lot of companies say they “support law enforcement” and for most of them that seems to mean nothing more than they allow officers to buy their products. At Blue Force Gear, they put their money where there mouth is… 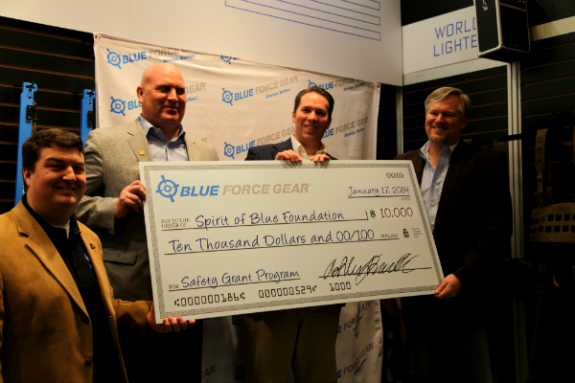 From Spirit of Blue:

CHICAGO, ILLINOIS – March 11, 2014 — The Spirit of Blue Foundation is excited to announce that Blue Force Gear has increased its support in 2014 with a $10,000 donation. The donation was formally presented by Blue Force Gear in its booth at the NSSF’s annual SHOT Show in Las Vegas, Nevada on January 17th. The donation will be used to fund the Spirit of Blue Safety Grant Program, which awards grants to law enforcement agencies for the purchase of safety equipment or training in an ongoing effort to protect officers’ lives.

“Spirit of Blue’s vision coincides with our mission to support those who defend our safety and freedom,” said Ashley Burnsed, founder and CEO of Blue Force Gear. “It is our privilege and honor to play a role in their efforts to raise awareness and provide better equipment so that officers make it home safe.”

“For the past three years Blue Force Gear has proven to be one of our strongest supporters, providing for our work in a number of ways,” commented Ryan T. Smith, Executive Director of the Spirit of Blue Foundation. “Without their commitment we simply wouldn’t be where we are today.”

About Blue Force Gear, Inc.
Blue Force Gear® designs the best weapon slings and leads the lightweight equipment revolution with its Ten-Speed™ multi-use pouches. They also reinvented MOLLE to be the world’s lightest with their revolutionary MOLLEminus™ technology and Helium Whisper™ pouch attachment system. Unrivaled innovation and attention to detail set Blue Force Gear apart from others in the tactical equipment industry.